On a windy, wet and cold day Jamaliah and I drove Passepartout to the harbor in Hamburg. Along the way we made a stop in front of a windmill to take a picture for our updated calling card. Because of the lack of sun it is a bit of a dull picture but it clearly shows were we are coming from and what we will travel in.

Checking in the camper in the harbor went without problems. No questions were asked regarding the gas tank or any other stored goods. Anyway the cupboard only contains our cloths, my tools and Jamaliah’s spices. All fresh stuff we will buy in Argentina after arrival. The other 4 campers in the harbor (4wd Landrover/cruiser types) had removed their number plates, so I also removed ours to prevent them being taken as souvenirs. The harbor agent also advised to store the 2 folding bikes inside the camper. They are now chained to a hook inside the camper. 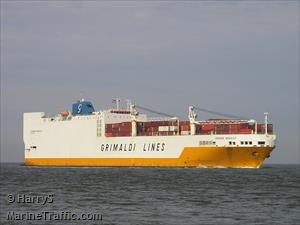 The first night of our holiday we stayed in a small hotel in Hamburg centrum. It is the time for Christmas markets. We strolled along the street in front of the train station which was light up with Christmas decorations. Along the road were stalls selling gluhwein, beer and German sausages. The standing tables outside the drinking stations were full of office people. It looked like they had an office party on their way home. The lousy weather (drizzling and cold) did not deter them but it did stop us from eating on the street.

The next day we took a bus back to Groningen followed by the train to Assen. Back to the cold wet weather till we fly out on January the fourth.