We still have to work a bit on our departure times. It was 9.30 this morning. Still we reached our destination, Damman on the Arabian sea, at 16.:30 hrs. It was only a 569 km drive. 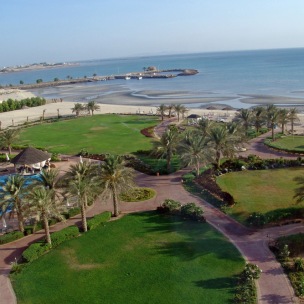 The border crossings were not too much of a problem. Based on Mark’s experience I immediately filled in the forms at the UAE departures and got the stamps. The customs officer could however not find Jamaliah’s and the boy’s name in the system as an entry and spent a long time re-entering them. At the Saudi border things went even smother. Except for the cursory luggage check we did not even have to get out of the car for the passport, custom’s and car insurance. Only changing money took a bit of time. The drive was uneventful and the road not too bad. We only struggled to get through Hofuf. The car navigation system showed a road but I think it was removed (like we saw elsewhere). We were directed all through the town and its suburbs. Jamaliah’s Arabic script reading capabilities saved the day, because there were only limited signs in the English script. Most of the way was driving through a flat desert with no vegetation till Hofuf, which is a large oasis.

From there to Damman is also a bit more interesting and there were some eroded carbonate rock faces similar to the ones in the Huquf in Oman. Thanks to the car navigation system we made it to the local Corniche and found a nice little Hotel/suite for a reasonable price. Breakfast was taken at a local truck stop before the SA border. The lunch stop did not work out too well because Jamaliah had to stay in the car. So we bought some coke and tea and had briscuits in the car. Diner with the boy’s was a 20 min walk down the road to the local Kentucky Fried Chicken. Jamaliah stayed in the hotel room. She did not feel comfortable walking around in an abaya in SA.