The university town of Dunedin was started by the Scottish in 1848 and still has a strong link to Scotland. Of course there is the Robbie Burns statue as well as the Anglican cathedral. The train station also used Aberdeen garnet for its pillars. The town is build on the slopes of the Otago bay and has some steep streets. Jamaliah took the opportunity while in town to visit the Cadbury chocolate factory. Awesome. 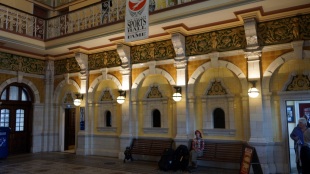 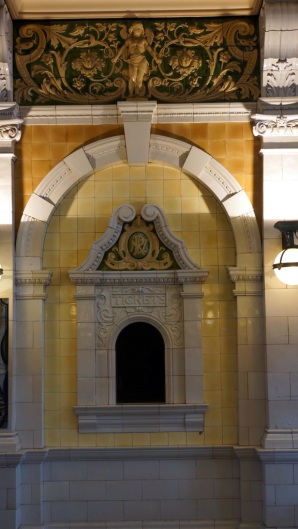 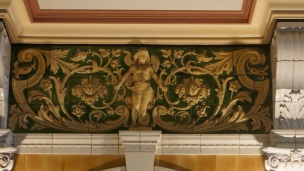 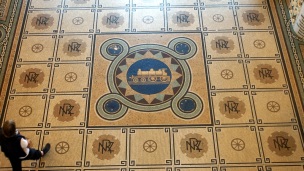 We drove around the bay to the end of the Otaga peninsula to see a nesting site of the mighty Albatross. We were fortunate to see a few chicks on the nest. The parents were out gathering food. Only once every 2 years do they come back to the same place to lay 1 egg. 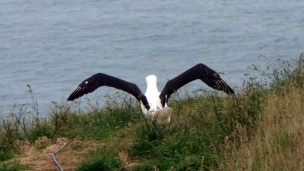 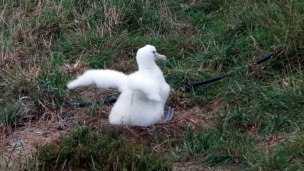 Before this site was a military fort with a working Armstrong Disappearing gun from 1886 against the perceived threat of the Russians against the British empire, after creating a naval base in Vladivostok. 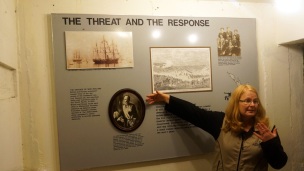 The road from Dunedin to Oamaru is inland from the coast. Like most roads in New Zealand it is well maintained and not too busy. Large old trees dot the roadside. Once in a while there is a passing lane to overtake the big milk/cattle or logging trucks but we are not too speedy ourselves so we mostly just do not bother to overtake. It is a rolling hill agricultural landscape with some sheep and cattle paddocks as well has wheat fields. The wheat is mostly already harvested. It feels like driving though a golf course. We made a short stop at Moeraki to see the large round calcified sandstone boulders lying on the beach. Some of them have fallen apart and you can see how they are built up/held together.

In Oamaru we admired the large Victorian sandstone buildings from time gone by. The towns riches came from the refrigerated meat shipping at the end of the 19th century. Now there is only tourism left which is attracted by the many second hand shops and weird scrap metal artefacts (“Steampunk”). The penguins were out so we had to do it with the other sea birds. 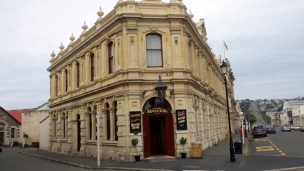 The sun had started to shine again when we followed the Waitaki river valley inland past some hydro electrical dams and stopped at one of them for lunch. It was a very gradual climb 753 m all the way up to the Mnt. Cook basin. Not very busy on the road so we made record progress today (341 km) and are back on schedule. 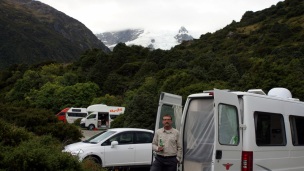 The next morning we walked up the Hooker Valley Track along a glacier stream and over 3 swing bridges up the valley towards Mnt Cook (3724 m). After 1.5 hrs over a well laid out easy path we reached Hooker lake and had a clear view of Mnt. Cook. In the lake there were floating ice blocks which had come off the glacier. Overhead there was a helicopter bringing down equipment from the mountain. Now and then you could hear and see small avalanches coming of the glaciers and rolling down the mountain like it was water. 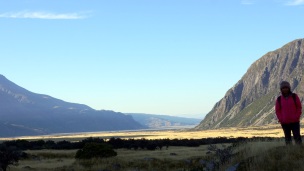 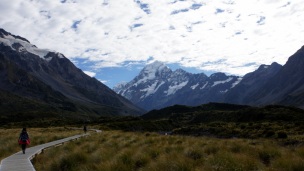 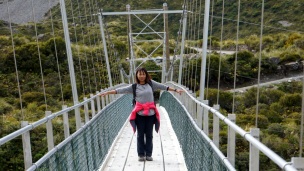 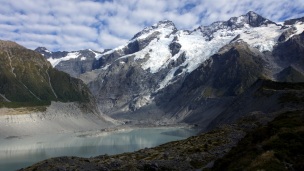 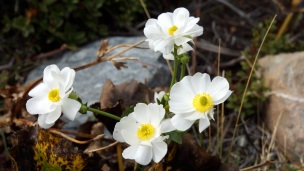 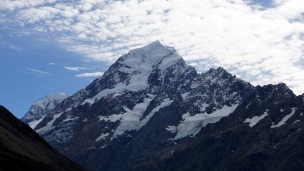 From the mountain it was a sunny and relaxed drive along lake Pukaki down to the main road running over the high plains to Christchurch (340 km). We did make the recommended stop at the Lake Pukaki visitor centre and bought salmon filet there (for the evening meal). The closer we got to the town the more busy the road became. The sun also disappeared behind clouds coming in from the pacific ocean.