When leaving the campsite we discovered that there was a 28 km forest track over the hills that cut off some 60 km of the road. Even Jamaliah was willing to take the risk of the bumpy road, but hoped she would not regret it. The road was well graded and we reached the SH46 around lake Taupo without problems. In Tokaanu we visited a hot springs. No doubt the first of many. Wonderful place. 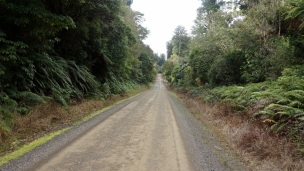 The plan was to go on a one day, 9 hrs walk, over the Tangariro crossing (19.5 km). Highlights of the walk are streaming vents and hot springs, old lava flows, water filled craters and stunning views of the 2 nearby volcano’s. However the i-centre in Turangi said the weather expectation for tomorrow was bad. Rain and strong winds. Shame. We will have to see if we can fit it in some other day. To still get some exercise Rudy managed to convince Jamaliah to do a 2 hr mountain bike loop (Tongariro river trail). It was following the river and included 2 swing bridge crossings. After the initial fears and pains Jamaliah got in to the swing of it i.e. staying in low gear or just walk the bike up the hills. It was scary in some parts of the trails, especially along the high ridges and, since she is not familiar with a mountain bike, it was tough. But she survived. Not sure if she wants to do it again soon! (109 km) 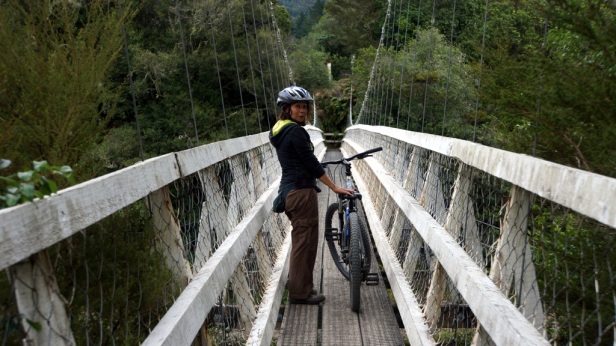 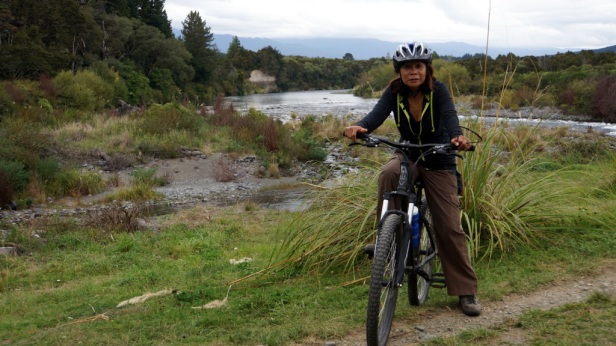 Because the weather was still poor (so no crossing) we drove up to the ski Chateau at Whakapapa for a wet walk of 2 hrs return to the Taranaki waterfall. The longer we were on the track the harder it started to rain and the more the track changed into a stream. After changing into dry clothes we had a fisherman’s basket in the Chateau. 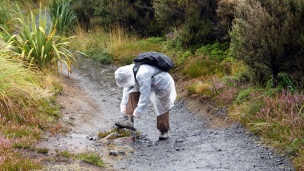 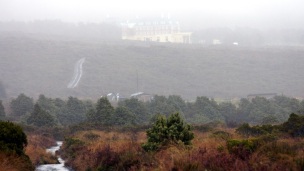 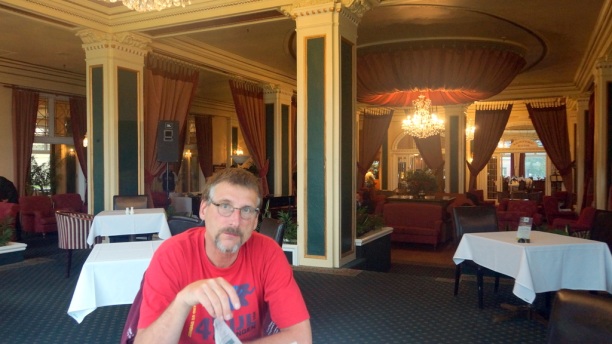 The drive along lake Taupo to a campsite just north of Taupo town in the Wairakei volcanic valley was without vista’s on the lake due to the rain (166 km). The next morning we first did a ½ hr walk around the thermal valley at the campsite 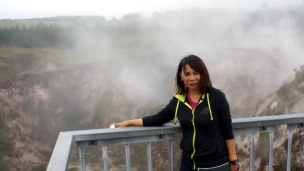 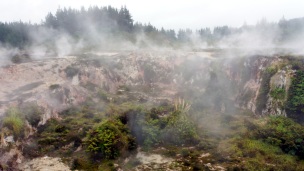 and then drove back to Taupo to see the impressive Huka falls. Lake Taupo feeds a fast flowing stream which squeezes itself through a narrow gorge (fault) into the Waikato river. 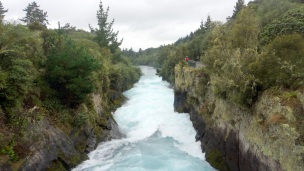 Thereafter there were 2 more visits to volcanic sites. In Taupo it was the large “crater of the moon” where we saw lots of fumaroles (bubbling water) but not too much else. At the “Hidden Valley” in Orakei we were treated to a lot more volcanic features like solidified rock flows, mud pools and fumaroles. For spouting geysers we have to wait for Rotorua so we drove there and stayed the night. The campsite has its own thermal (spa) pool so we made use of it to warm ourselves after all the rain shower. (125 km) 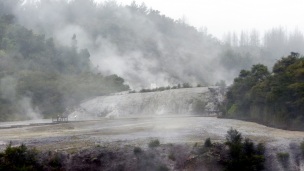 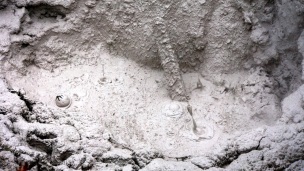 Rotorua has 3 things we were interested in. One was the forest which was planted a century ago with over 150 types of tree’s. It is now very mature and dark. We had a short drive through it and saw the large/tall redwoods. The second was the Whakarewarewa thermal Maori village with its culture show, village life around cooking food in the thermal hot water and the 2 geysers. We had a good guide and stayed for several hours in the village where some Maori people still live. We tried the corn on the cob cooked in the hot spring and it was delicious. The cultural show was short and entertaining. 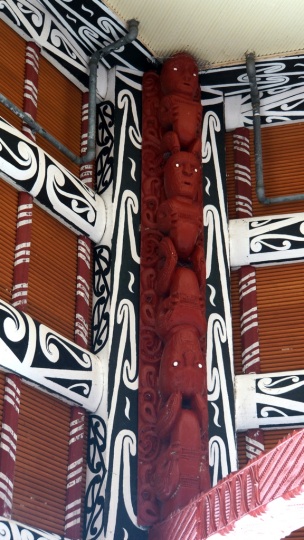 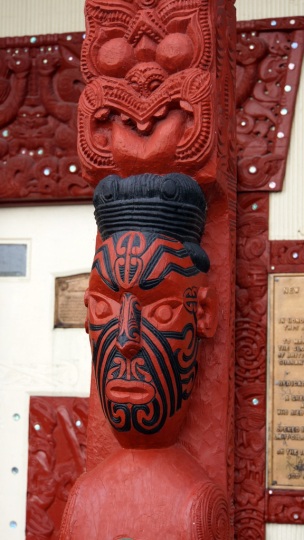 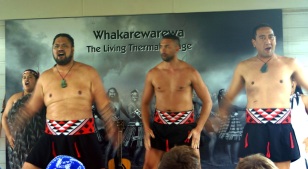 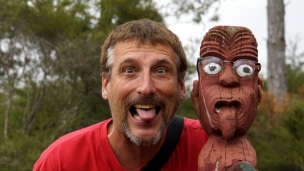 The third one was the Museum which is in the former colonial bathhouse (1908). There we also had a excellent guide and saw the old thermal bathrooms, both water and mud, as well has the large collection of Maori carvings and historical pictures. 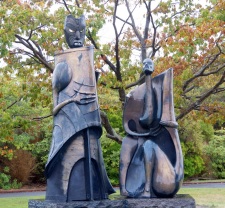 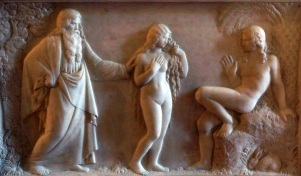 The day went by quickly, so we only drove some 20 km further and camped along a small stream running into lake Rotorua. 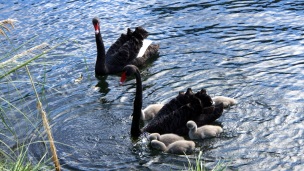 It rained a lot during the night so the camper was damp and a bit wet. It is not clear if there are any leaks. Before going to Hobbiton near Matamata we decided to take a detour to a fenced off nature park called “Sanctuary Mountain Maungatautari”. All mammals have been removed from this mountain rainforest so the bird life is being restored. We in fact did hear several birds and even saw the KaKa, a rare local parrot type which they are trying to re-introduce. Again there were large mamaku ferns as well as large Rimu and Pukatea and was well worth the detour. The Hobbiton Movie set tour was well organised. A bus brings you over a hill into a valley with some 48 Hobbit houses built into the hills surrounding the large round tree with the party field and the lake with the Green Dragon Pub. You walk through the reconstructed film set and can pose in front of the hobbit houses. In the sunlight of the late afternoon everything looked serene. We loved it, despite the large number of people milling around. The tour included a specially brewed ale which is served in the Green Dragon Pub. We camped a bit further up the road from Matamata at the Opal Hot Springs and Rudy had a dip in the warm water. 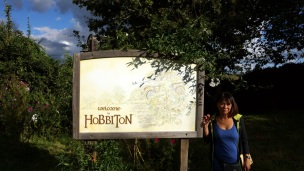 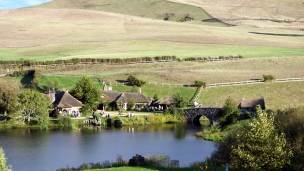 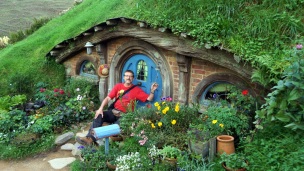