We are driving around the lakes in the Chilean lake district. It is interspersed with volcano’s. The roads in general are surfaced but we also have to take some small gravel roads in between the main network. One of these roads reminds of the district of Twente in Holland. Left and right of the road are rolling hills with freshly harvest wheat. The color of the red earth is visible through the wheat stumps. Here and there it is already plowed for the winter rest period. On one of the roads we took, is lined with large old oak trees. This is not a native tree so the seeds must have been brought in by emigrants. Midday we reached the tourist hotspot of Pucon on lake Villarrica. This used to be the retreat for the rich and famous of Chile. The nearby conical volcano dominates the town. Besides water sports the town has a large number of hot springs (thermas) in the neighborhood and offers trekking excursions up the mountain. We satisfied ourselves with a luxury scrambled egg in one of the many restaurants and a fill up of the depleted grocery stock in the camper.

The night was spent at the next lake further south on a paid camping. Already you noticed that the holiday season is over. There were just a few tent campers and the recreational area was closed.

The next day (Monday 5/3) we resumed our drive North. It was a relatively short drive (219 km) because the museum in Temuco we wanted to visit was closed on Monday. We stayed at a highly recommended campsite run by a German couple who spend half their time in Chile running the camping and the other half in Germany. Since they are not fully dependent on the income of the camping (season is only 3 months) it was half the price of the previous camping (Eur 7.50 pp) and being Germans everything was clean and working.

Ever since the repair of the suspension (21/2) we noticed that the camper (household) battery was not being charged during driving.  We contacted all the people we could get hold of for advice. Rudy even bought a new multi-meter to measure the wiring in order to establish where the problem is. Werner, the host at the camping, is an electrician. With his help we re-measured the whole system and established that there must be a fault (resistance) in the wire from the alternator to the battery.  There is a high voltage drop over the cable so the battery is insufficiently charged. Unfortunately without tracing the cable by removing the camper paneling, it is not possible to find the source of the problem. So we will have to live with it being charged via the solar panel and where possible connect to the electricity net.

From Werner and Ellie’s  campsite we drove back to Temuco to visit the local museum and become familiar with the history of the local Mapuche tribe which have so successfully withstood the Inca and Spanish invasions. Although the museum showed some pottery and other Mapuche utensils it did not give an overview of their history and struggles. The next stop was to be another national park with large native trees. The road towards the park leads through large wheat fields and forests. There is a lot of logging going on. However the trees are being replanted by fast growing pine and eucalyptus, so the destruction is not as obvious.

Along the way we heard a scraping noise underneath the car. It was the broken off pipe of the exhaust hanging on the driveshaft going to the rear wheels. We made an emergency stop in the next small town and asked around for a welder. This man did a fantastic job of welding the broken pipe back to the muffler and after 2½ hrs we were back on the road. We decided to skip the national park and drove on to a small lake where we had a peaceful night’s sleep. 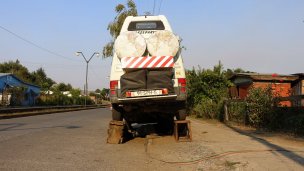 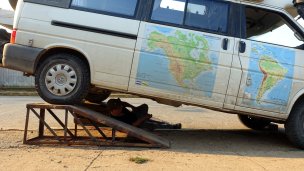 Driving further towards Conception we first passed through wheat fields and logging forests again before reaching the coast. That stretch of the coast is full of industry and not very attractive. The only thing we knew about Conception is that it has a university museum with a large Mural showing the history of the land. This and the friendly atmosphere was well worth the stop. Being a university town you see a lot of young people and plenty of fastfood shops.

This area of Chile has been hit by a 8.8 earthquake in 2010. A lot of towns and villages had been damaged. Every village you drove through has large rows of similar new house which must have been built for the earthquake victims.

Some 150 km further up the road through the hills (up to 550 m high) we hit the coast again and camped on the beach and watch the large pacific waves crash on the beach and the nearby rocks. There is also a Piedra del Inglesia (Church of Stone), a massive rock that contains a huge cave that opens to the sea. Impressive! 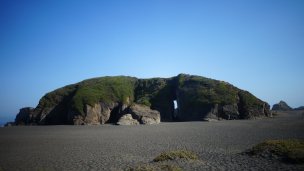 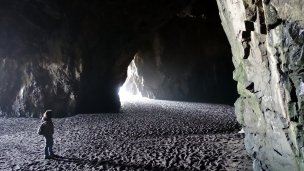 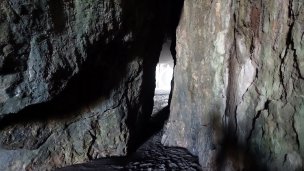