We meant to stay 2 nights in the last hotel but after experiencing several power cut during the night, we decided to pack up our bags and move on to Antalya. After a discussion with the boys, we agreed to visit only one ruin this morning and thereafter we will go the Aqua Park in Antalya for the rest of the day. The ruin of Aspendos (which is about 30 km out of Side) consists of a theater (the best preserved according to the booklet) and is still used today; the remains of a basilica, an agora and an aqueduct (one of the largest aqueducts in Anatolia). 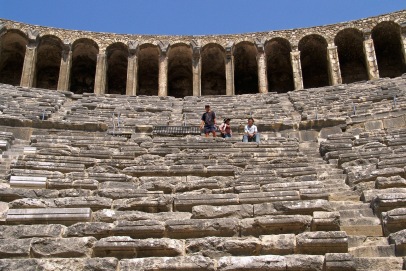 Because we are going to the aqua park after this excursion, Anton for once is a much more approachable person than normally found in the morning. The walk around the theater and ruins was interesting and pleasant. We even managed to get Anton on a few of the pictures. At the end of the walk, we were soaked. Not from rain but from the high humidity here at sea level though the temperature is only 33 deg. 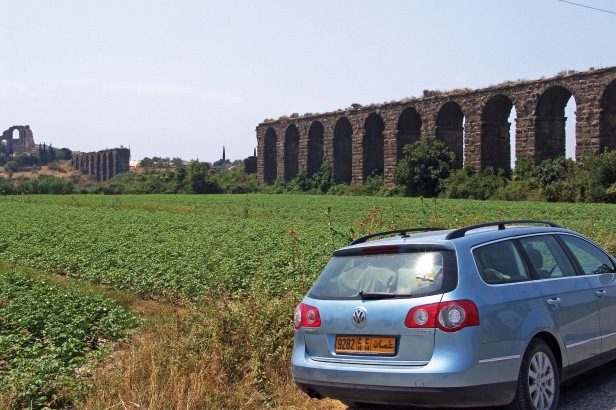 We found the Aqua Park without problems thanks to the directions of a friendly gas station attendant. To pay a half day entrance fee ($12 pp) we had to wait for 1/2 hr till 14:00. During this time, Rudy went to the hotel next door and decided to treat the family on a luxury overnight in a 5 star resort. (Only because the Aqua Park ticket was included in the room rate). The hotel has its own private entrance into the Park. The boys enjoyed themselves on the numerous slides and JJ read a book while Rudy meditated and solved the world’s problems in his sleep. We also had a short swim in the Mediterranean Sea later. Dinner was Burger king for the boys and a romantic candlelit dinner for Rudy and JJ on the 10th floor of the hotel.

P/S Sorry we were not able to update this website for the last 2 days due to the unavailability of internet connection. We could have done it last night except for the frequent power failure and early closure of the office.