Crossing the border this morning was a non event. The Bulgarian side is on the south side of the Danube River and the only thing you noticed was a gate for paying the fee for crossing the 50 year old deteriorating “Friendship” bridge. On the Romanian side we were stopped at customs who wanted to see the car papers. After noticing the Dutch passport and the Arabic written Oman registration they quickly waved us through. Most likely they did not want to deal with the complications. There was no sign as to where to buy the road tax sticker but after asking around they pointed us to the petrol station. They only want Euro’s but since we had some Bulgarian money (leva) left over we wanted to pay with this first. After some discussion they took the Bulgarian money (the bank at the boarder appeared to be closed). It was only 55 km on to Bucharest where, based on experience, we followed the GPS towards the center of town searching for the old city or the gigantic Peoples Palace built by Ceausescu in 1985. As usual the first impressions of the city were negative: busy, dirty and “where the heck are we now on the map”. We needed to change money first before we could do anything else, so we had to stop and find a money changer. The money here is call 1 Lei, singular, but 5 Leu, plural. Just to confuse JJ more. For the children it was worse. Forget what you call the money. They don’t even know what country they are in anymore. It was 13:30 by then, a bit late to drive on and since it was still raining, JJ suggested looking for a hotel here and seeing what the town had to offer. Rudy went to the Euro 150 per night Marriot Hotel to ask where the cheaper hotels are and get a more reliable city map than the one we have. They pointed us to the nearby Ibis hotel where we are now staying. The room has a nice view of the Peoples Palace. We parked the kids and the car at the hotel and wandered down the huge streets towards the People’s Palace. This palace organized an hourly tour (you are not allowed to wander around on your own without guide), and we were fortunately enough to tag on to a group tour (starting as soon as we arrived) and see the inside of the second largest building in the world. 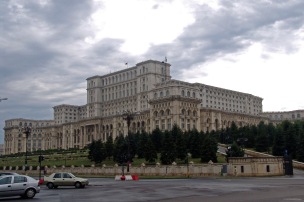 The inside is all marble and large glittering rooms. At least the ones they showed us (there are over 1000 rooms on 11 above ground floors and 3 floors below ground). Besides functioning as a tourist attraction the building is also used as a parliament building. After the Palace we wandered down the huge Boulevard Uniri and turned off into what remains of the old city. A lot of the left over monumental buildings are used as banks or by the government. Some of the streets are broken up for new sewage systems. Clearly money is being invested to upgrade the city. There are also lots of small churches. In one of them (Stavropoleos, 1724) we saw long lines of devotee’s (mostly women) queuing up to pay homage to the saint’s icon. 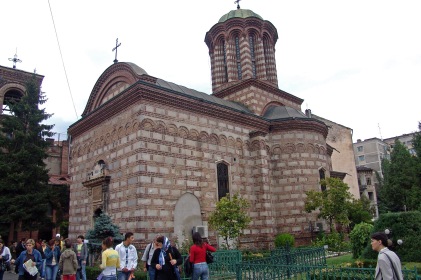 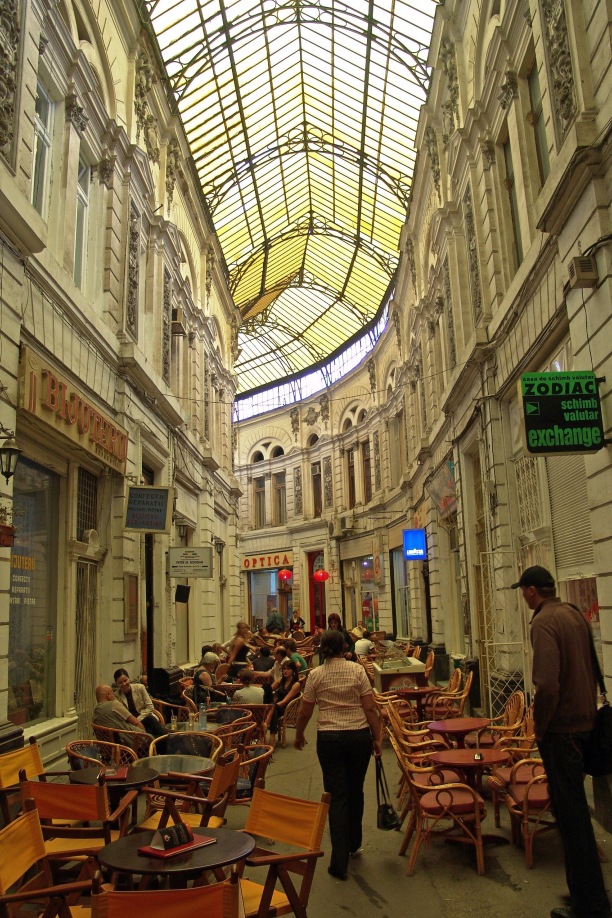 Inside the church several priests were reading out texts given to them by the church go’ers and giving their blessings. By this time the rain has stopped and we finally saw blue sky for the first time since we left Turkey.

PS Just checked on Anton: only 200 pages left of the new Harry Potter book (650 pages total). Rudy is only on page 70 so he has some catching up to do. Anton says it is “erg spannend” and only wants to go and eat downstairs in the hotel