The Russian Federation map a friend of mine bought in Russia was enlarged and printed on the side of Passepartout. It is a projection that has both Amsterdam and Vladivostok on it. I did not realize beforehand that most of the trip would be through the Stan countries which are at the bottom of the map. Zo I will have to go down on my knees to plot the route. 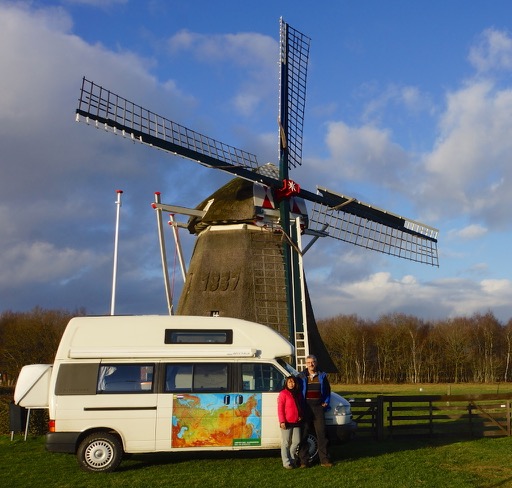 As preparation I also bought a second hand Lenova Thinkpad. Great machine. Robust but a bit big for on the car dashboard. Also it has a hard drive which most likely will not last the trip. I am now getting a Solid State Drive installed. I will try and find a good place for it in the camper and connect it via long cables to the Garmin Etrex (Vista HCx) GPS and fit a smaller LCD screen for the dashboard. Once the new drive is installed I can load up all available maps in Map Source as well as the tracks from other travelers.

The details of the trip are becoming more clear. I have worked out the details of the trip as was originally planned by Camperreis.nl. All dates, towns and distances are now in a spreadsheet. As it looks now we will be leaving on 21 April 2014 and reach Vladivistok after 112 days and 20,700 km around August 8. After the excursion to Kamchatka, Jamaliah will fly back and I will drive Passepartout via Magadan back to Assen where I hope to arrive around 13 October (total 38,000 km).

We have a total of 6 campers making this trip. Two of them are 4WD. You and I will all get to know them as the trip unfolds.