This was a full day on the Pamir Highway. High in this case means altitude and not that it is a good road. The morning was cool and sunny and the track still reasonable. We had some confusion about the way forward due to misinterpreted SMS’s. The best option still was to drive on.

Along the way we gave a lift to some old people who were most likely on their way to the Friday mosque. The progress was slow using only second and later first gear. At a split in the road/police check we met a Van with Russian people who mentioned that the road over the pass had several landslides and at a river crossings you would need a tractor. We decided to have a go anyway. After 2 km we came to a river crossing at a land slide. We managed to get over it without problems. Was this what they were talking about? 3 km further we came to a much larger stream to cross. The car in front of us was already stuck and needed assistance. Rudy got out the towing cable but got stuck ourselves when we tried to get to the other side. Another passerby managed to cross but did not have the power to pull us out. A tractor was arranged and for some $10 per car he was willing to pull us out. The track/dirt road became more steep. At one point there was a junction and nobody to ask. We chose the left branch. After 5 km climbing through a lovely valley with snow capped mountains in the distance we came to a small landslide. Cars were stuck there and construction work ongoing. We tried to pass but the road was too narrow, steep and slippery. The car in front of us had already ruined his coupling on the slope. We all helped building the stone protection wall but progress was slow and we could have been there for hours. One of the other drivers mentioned that the side road we have just passed went up to the pass (3258 m) as well. We turned the car and started that climb. At one point we had to reverse the car. The ridge was too high and the bottom scrapped over the stones. The protection cap of the gas tank got damaged. All essentials were still in tack so we struggled on again. One particular climb gave us a lot of trouble and we had to take a long run and several attempts to get up. Finally the road was better at some 2300m and we met the original road again. Jeroen joined us not long after. We drove the last bit over the snow-cleared road up and over the pass (3252m) to a camping spot a bit down, some 24 km before our goal. A whole day for just 103 km, but it was beautiful. 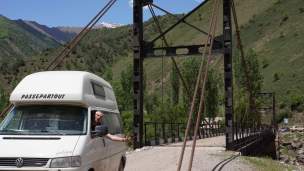 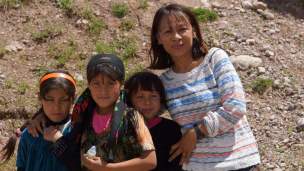 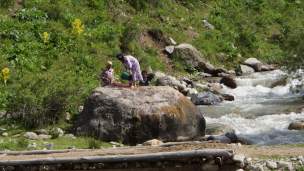 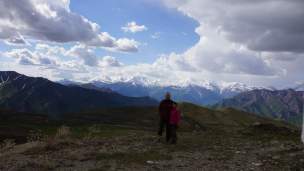