The first stop was at a garage to get the oil and oil filter changed as well as the air filter. Since the others had been there the day before it all went smooth and we were done in an hour. The museum was closed so, after some shopping we hit the road.

The others had already left town hours before us but still we passed them one by one. After 103 km of smooth road we came to the junction with the M41 “The Pamir Highway” built by the Russians to control the mountainous region close to Afghanistan. 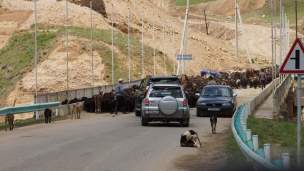 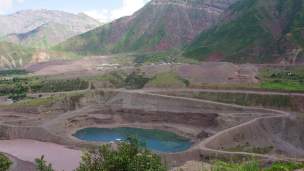 The dirt road twisted and turned through the valley. Occasionally we had to cross streams which had just been made passable. Progress was slow especially because of all the large herds of goats and sheep which were herded through the mountain to their summer pastures. Around 17:00 we stop for the night as it was getting late and Jamaliah is tired of driving through herds of sheep and goats. Since there is no telephone coverage there is no way of trying to find out the location of the other campers. Hopefully we will see them tomorrow. At nightfall we were visited by a sheep herder and later on we visited their camp. We were made welcome. They rolled out several blankets for us to sit on while they skinned and cleaned the just slaughtered sheep. They wanted us to wait till it was cooked but that would have definitely taken over an hour and as we were really tired, we declined gracefully. 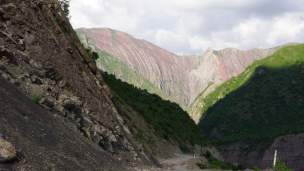 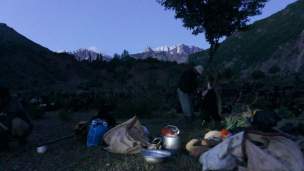