We are off early this morning due to 2 things. First the sun was right on top of the car so it was getting very hot even though it is still around 7 am. Secondly Jamaliah woke up earlier than her normal 7am due to her telephone, which she uses as an alarm and clock to see the time during the night. What she didn’t realise is that since we were so close to the Chinese border her telephone was set up to Beijing time zone which means that it is two hours ahead of Kazakh time. So 7am was in fact still 5am local time. Didnt realise this actually till the day after.

The trip to the lake was 60km on unpaved winding road. The lake itself is at 1500m so it was cooler than where we were earlier in the morning. We arrived around 11am at the village by the lake and did a walkabout. Unfortunately there was no place to camp by the lake so we decided to drive further up the road and found a nice spot along the road with a great view. The only problem we had here was mosquitoes. Thousand of them. I was a prisoner in the camper. Cant step out without being swamped by them. 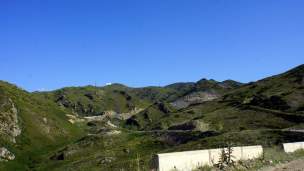 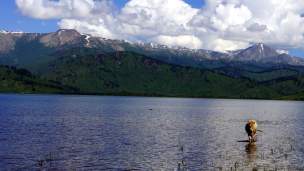 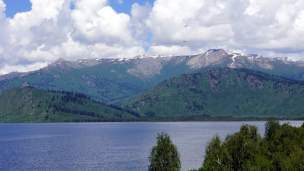 In the end I had enough of it and so around 5pm we decided to move down from the village. We found a spot (in hindsight bad decision) by a rest stop next to a stream along the road. We were just settling in and Rudy was enjoying his glass of campari when a village drunken idiot came by. He was very aggressive and try to barge into the camper. We pushed him away, locked all doors, closed all windows and within few minutes drove away from the place. Unbelievable how fast you can get away when necessary. We drove down in the dark hoping to find a better place to camp and trying to lose the guy at the same time. I was so relieved when we reached the mid point village and Rudy parked the camper on the driveway of a local farmer.