Not only was this our wedding anniversary but also the day Netherlands plays Costa Rica in the Quarterfinal of the world cup. Good reasons to find a hotel. The M53 first brought us through Marinsk. The town was not mentioned anywhere but it should. We took the road through the town centre and immediately had to turn around to take a picture of a beautifully decorated wooden house. In the city centre there were several old houses from wood and stone nicely painted and decorated. On top of that there were several nice wooden statues along the way. 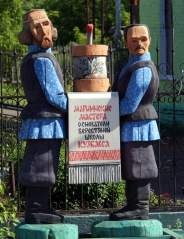 The next highlight was the dam and boatlift at Divnogorsk. To reach that we took a detour off the trans Siberian M53 road to the M54. The drive was a climb and descent towards the dammed river lake. The ramp to haul up boats over the dam was visible but I am not sure if it is still used. The city of Krasnoyarsk also has several Jugendstil style houses and a good museum. We will leave those for the return journey. 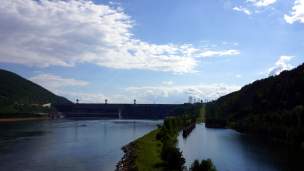 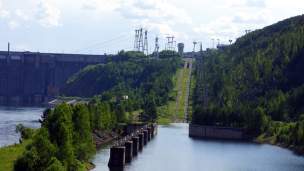 The old not renovated Sever hotel was at Euro 80, more expensive than the others up till now. We did get for that a very large room with sleeping and sitting section. Not really what we needed but the most important thing was the TV for the match. Unfortunately that started at 04.00 hrs but well worth getting up for great attacking from NL but no goals. The keeper saved 2 penalties in the shootout and save the match.