On Sunday, after spending 2 nights in the capital, Ulan Baatar, we continued our journey westward. But before leaving we first make a stop at the National Museum to get an in-depth view of the Mongolian people and their history. A very impressive museum with English explanation so we could understand what we are looking at.

After spending a couple of hours there we went outside to see the State Parliament Building across the street from the museum. There is a stage set up in front of the building with rows of chairs. We suspected this is part of the National (Nadaam) day celebration. We just don’t know what it is for. We did see a lot of people, mostly the older generation, dressed in traditional outfit, some with lots of medals pinned on their clothing, strolling around the square. After asking around, we found out that there will be a parade of different tribes in their traditional /native costume around noon here. Meanwhile we decided to walk around, have some lunch (local pancake filled with meat – delicious), took some pictures, top up the wallet with cash from ATM, and even have coffee in a cafe with free Wi-Fi. By the way, Wi-Fi is readily available here in Ulan Baatar. Even in the stadium yesterday we can get free Wi-Fi spot. 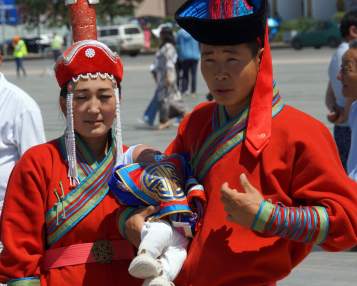 Because of the festival there was a large stream of cars driving out of town and progress was slow. We drove some 120 km to the Hustai national park and some 12 km on tracks over the grassy hills towards a valley where some Przewalski horses were roaming. The park runs a re-introduction breeding program. There should also be several types of deer but we did not see them. Since this park is so close to the city there were several tourist groups.

We camped on the grassy hills outside the park. The sun was setting, there was a breeze to keep the mosquitos and flies away so both of us could sit outside and enjoyed the view.