The information we got from other travellers was that you could continue along the lakeside and then hit a track going north to Moron. This sounded like an exciting route because in that way we did not have to backtrack to Ulan Baatar. We set of along the lake road but pretty soon got our first scare. Because of the slope of the mountain and on top of that the uneven track the camper was listing heavily. It was a bit scary but at least now we know not to expand the camper with a roof rack. Later on we got our first more serious river crossing. There were 3 cars at the cross point. Coming towards us. One by one they dived in and all came out without the license plate. Now we know why people put netting over their licence plate and front radiator. 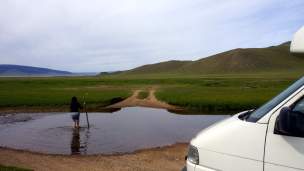 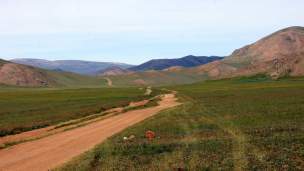 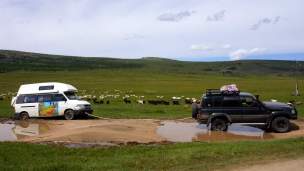 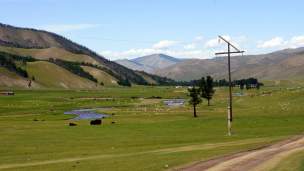 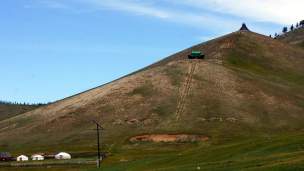 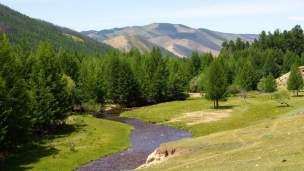 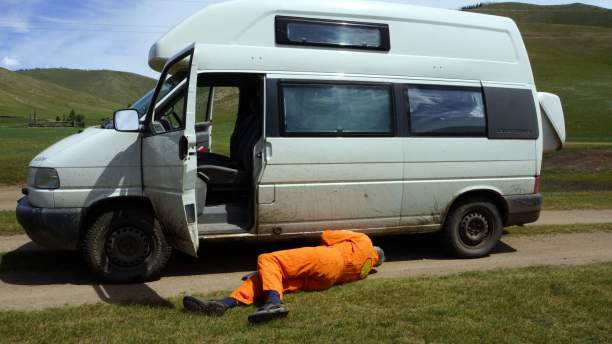 We assessed the scene but saw a car in the distance doing a detour. We turned around and did the same. That river crossing was a lot more manageable. Along the way we encountered a few more. Mostly Jamaliah got out to assess the best way to pass the river with a stick and walking through it. The water was bitterly cold so she was not looking forward to it. As a result on one of the other crossings (while it was also drizzling) we just dived in and yes also came out without our front number plate. Gone. There were also lots of muddy pools to drive through. On one we followed the tracks around the puddle only to get stuck in the mud. No worries. The road was busy with local holidaymakers who mostly drive big 4×4 Toyota’s. The first one pulled us out in no time. From now on no more detours to avoid puddles. We learn quick. Although the track was hobbley and had its share of dry (Jamaliahs favourite) and wet river crossings it was very enjoyable to drive and take in the lovely scenery. Several times we were high enough to drive along river streams with trees. There were also some passes (max 2300 m from 1550 m) to cross. Since progress was slow (172 km the first day) we stopped at another mountain lake (2006m). We were the only ones there for a change. It was shallow water so despite the cool air temperature the water was warm enough for Rudi’s bath. The beautiful sunset was enjoyed from the inside of the camper because the cold wind had picked up. 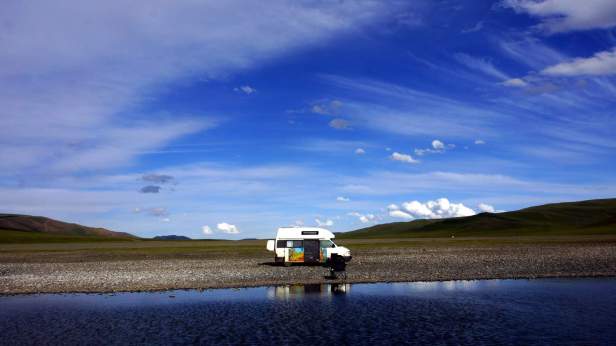