On Monday we followed the M55 around Baikal to Irkutsk. On the way we overtook 2 campers from the same perestroika group we had seen in Uzbekistan. They were also on the way back. Our aim was to be in Irkutsk in time to get the diesel filter changed out at the Volkswagen garage. We had seen the garage on our first visit to and found it without problems. They were very helpful and like any large garage took first all your details into the computer and then you handed in your key and had to wait. No problem. There was aircon and Wi-Fi. After 2 hrs they said it would take a little longer. I did not quite understand this because changing a diesel filter should not be a major problem. After a further hour it appeared that they had never dealt with this model and that the bridge, which would be required for lifting the car, was not available. So we got our car keys back and left the garage as we came. The good thing was that they had not touched anything so all was still working (we did find a pliers left behind on top of the battery in the engine compartment when checking the oil the next day). We drove through the traffic jam into the centre of Irkutsk and parked the car on the riverside. The sun was shining. There was a breeze to cool you down so ideal conditions for a stroll along the waterfront. We also visited 2 lovely Churches along the way. In one the caretaker took us up into the bell tower for a nice riverside view. 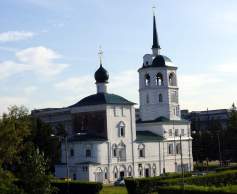 After some late shopping we decide to still drive on a bit and found a camp spot next to a roadside mechanic/petrol station.