On the first stretch of the road to Gdansk there was little traffic so it was a beautiful relaxing drive through the cut wheat fields and forests. Once the road from Warsaw joined the number of trucks and other traffic increased and you had to stay awake. We found a parking place in the centre of town and spent an initial 4 hrs roaming the streets of the old city. Amazing how they reconstructed the bombed out city brick by brick. It again has a nice Golden Age feeling to it. Since it was one of the richest cities of the Hanze league the houses were richly decorated. The harbour area also had several large storage houses (at least on the side that was restored). The city had several gates and behind each was a lovely old street. In the evening we went to a camping near the town and close to the beach. Tomorrow we will go again but then visit the museums. 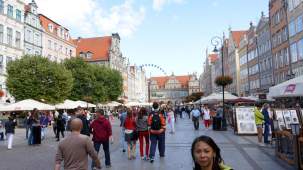