Before departure we set the TomTom to “no motorways” and “no toll roads” with Granada as destination. It took several minutes to calculate the route of some 1100 km over rural roads through the center of Spain. No more worries. Follow the guide! It directed us nicely over small roads up and over the Pyrenees down to La Seu d’Ugell, our first stop in Spain after 198 km. The wide valley narrowed the higher we got. Most of the way we followed a small stream winding its way down the mountain. Over a pass of 1713 m we reached a high plateau surrounded by higher mountains. This was a ski area. Ski piste’s were visible on the hills and ski hotels and chalets dotted the slopes. Despite that, not an unpleasant sight. The border with Spain is in the middle of this high plateau. We nicely circumvented Andorra and descended down the mountain to some 690 m and found a municipal camping close to the centre of La Seu d’Ugell (198 km). The town has a lovely (very) old fort-like Roman church with narrow streets in a grid like fashion around it. The town must have hosted white water rafting during the Barcelona Olympics because there was a long stretch of river converted into a kayak course. Large pumps pump the water up to flow down the track. When we walked the course there was only a trickle of water and a few kayakers practicing the turns around the hoops. The campsite has room for some 8 campers. Next to us was a couple on an extended holiday traveling around Europe. We had a lovely evening together exchanging stories. The following morning we explored the church and museum as well as the local market with its large size vegetables.

Chapel in the Pyrenees 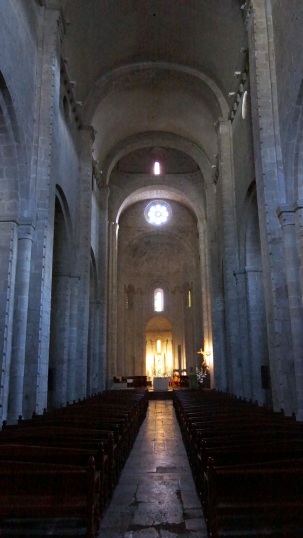 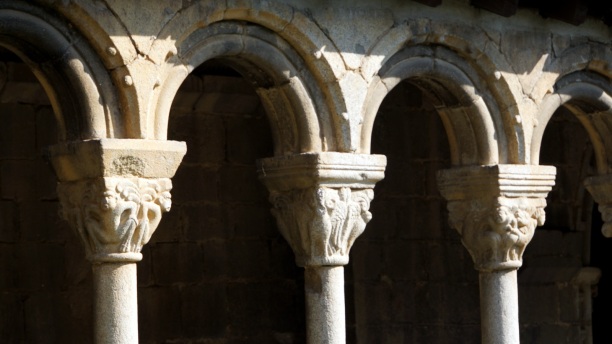 capitals in the cloister

We let our TomTom guide us further down the mountains to Lleida where we had a look at the castle/cathedral structures on top of the hill in the center of the town. A wind/sandstorm was blowing hard and rain was on the way. We made a quick tour on the outside of the buildings. It was still siesta time so we could not visit the inside of the “La Seu Vella”(13th – 15th century). The route continued south west over a good, but winding road following partly the Rio Ebro with its many hydro dams. In the evening we camped at one of them, Lake Caspe (206km).

Outside of the Cathedral

Decoration above a side door