It took a while before we got on the road (13:00 hrs). Still we had hope to reach the Ardennes in Belgium. Being a Thursday the roads were not too busy. A bit of rain here and there but we made good progress. All motor way till Liege in Belgium. We still had to go straight through town and by that time it was rush hour. Once out of town the road opened up and we climbed out of the Maas valley on the Ardennes plateau of around 600 m high. Jamaliah found a campsite along the route where we spent the first night. Most campers/caravans were heading south in search of warmer and dry weather. After tanking in Luxemburg (Euro 0,973) we crossed the border to France and stayed all the way to Narbonne on the Route du Solei. The French toll roads are well maintained and wide (3 lanes) so progress was steady (100 km/hr). In Lyon itself there was a bit of a traffic jam (again rush hour) so we did not drive much further. 690 km in a day is good enough. We found a nice rest stop along the motor way. There were restaurants with free toilets and WiFi and a big parking lot on which we could park the camper. We were not the only overnighter. In the morning we saw at least 10 other campers. From there it was only some 385 km to Carcassonne. We stayed at a campsite nearby in Trebes. While waiting for Rudy’s sister and husband to arrive we took our bikes down and cycled along the Canal du Midi. This was a beautiful drive over the tow path underneath 100+ year old Plantains. The canal is wider than the ones we were familiar with in England. Also the tourist rent a boats are a lot bigger and more modern. The sun was up as well as the temperature (25 deg) so we had a really enjoyable afternoon. Along the canal there are several locks (single, double and triple) so there was a lot to see. Around 17:30 Rudy’s sister arrived with their caravan. They are also on holidays in Switzerland and France.

On Sunday (27/9) Jamaliah drove with Mieke and Peter in their car to Carcassonne. Rudy left half an hour earlier on the bike to cycle along the canal to the town. The canal winds itself around mountains and over small rivers (aqueducts). It is a nice bit of 18th century engineering. Several locks sort out the height difference in the landscape. This canal continues all the way to Toulouse where it links to the Garonne. So you can go by boat from the Mediterranean sea to the Atlantic ocean.

Cycle path along the canal

Another set of 3 locks on the way to Carcasonne 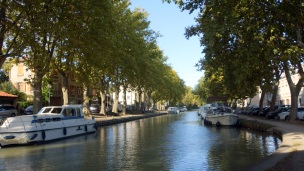 Trees planted 100 years ago along the canal

Carcasonne is well known for its walled city (13th century). Already from a distance you can see it on top of a hill surrounded by the new city (but also several hundred years old). This defensive structure was built on top of an old Roman fort and used for the defense of France on the border with Aragon (Spanish). When the border moved to its current position (1659) it lost its importance and decayed. Just in time in the 19th century, its historical value was recognized and a complete restoration started. Rudy cycled in between the double wall which circles around the citadel. Inside there is a maze of small streets full of tourist shops and tourists (cannot imagine how many there are in peak season) . On one side there is a Gothic/Romanic Basilisk ( St. Nazaire, 1096 – 1321) and on the other side the old castle with a dry moat, inner courts , towers and parapets. The wooden hoardings hanging over the top of the walls are unusual. A museum inside gives access to the ramparts. Walking over them give you the same feeling as walking over the walls of Dubrovnik. 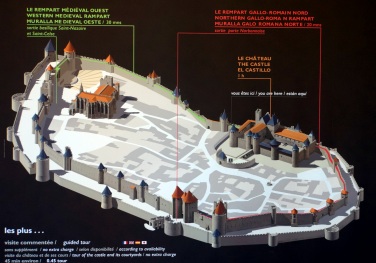 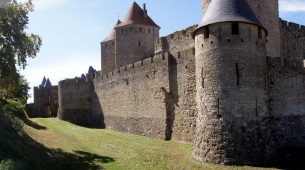 Double set of walls around the city 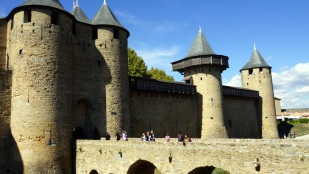 Entrance gate to the inner castle

Vieuw of the town below 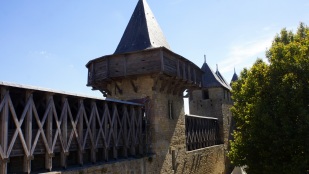 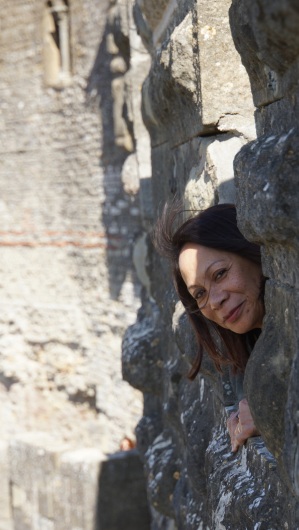 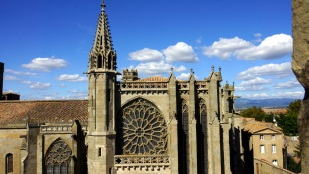 Decoration inside the cathedral 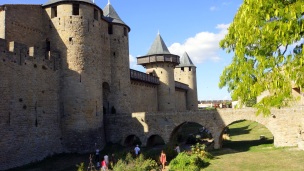 Bridge to the castle