We took the small road into the foothills of the Sierra de Almijara. The first stop was at Ronda. This time no church visit, just wandering (for Rudy hobbling) around. The town straddles the narrow (100 m wide), 100 m deep El Tajo gorge. An old bridge connects both sides. Since it is a long weekend in Spain the town was packed with people. As a result it was a long walk from the car park into the town center. From here we drove further over the hills/mountains to El Torcal which is a national park next to Antequera. We drove all the way up to the visitors centre at 1200 m and waited for the day travelers to leave so we could have a nice parking place to spend the night. 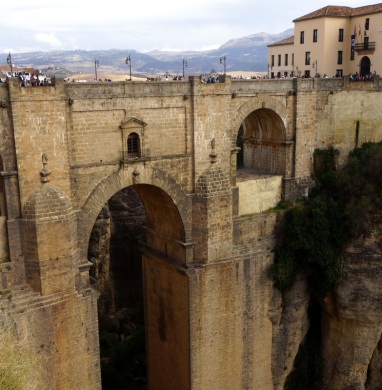 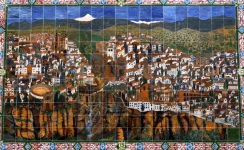 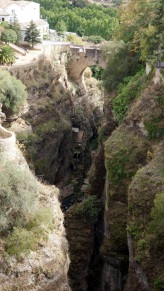 In the morning Rudy was not up to the 1 ½ km circular walk. The surface was too uneven (rocky) and it had climbs and descents. 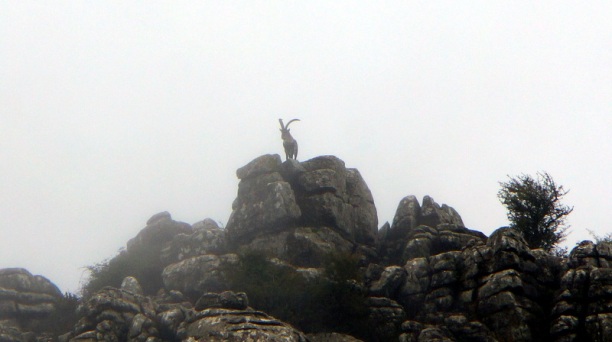 Instead we left early for the nearby town of Antequera which has, beside the impressive castle, narrow streets and old church some grave hills from a megalithic culture which lived here some 6500 years ago. In contrast to the Dutch Hunnebeds, these graves were more or less intact. Via an entrance tunnel you could reach the burial chamber. There are 3 such hills on site. One it orientated towards the rock formation in the distance that looks like a lying woman. 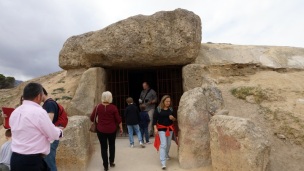 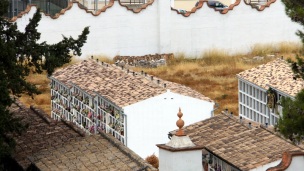 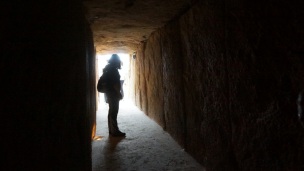 We followed the motorways to Granada and settled in on a busy campsite some 5 km out of town. They we could reserve a ticket for Tuesday (in 2 days time) to go into the Alhambra fort/palace. In fact we were still lucky to get tickets without having to join a tourist group. There are only 6000 people let into the palace each day so you have to be in time. 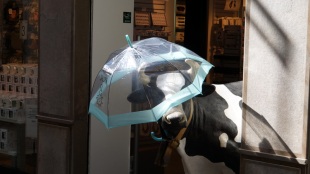 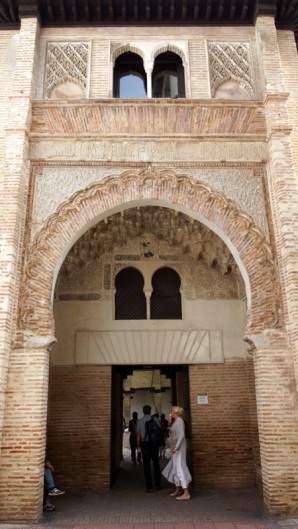 On Monday (12/10) we took the bus into town and wandered through the new center and the old Moorish section “Albayzin”. The streets were wide and modern. Lovely tree lined alleys lead into the shopping center. Just off the main streets you quickly come into the older medieval streets with cobble stones. No fun to hobble on for Rudy. Through one small street we suddenly came face to face with the cathedral. This was completed in 17th century in the Renaissance style. Not very interesting. On the outside there was some evidence of the gothic start of the cathedral in 1521. Through our first Moorish style port we entered the Albayzin area. There we followed the small stream up the valley which separates it from the Alhambra fort. The streets are steep and narrow but there are still small buses squeezing through. From the top of the hill there is a beautiful view of Alhambra. 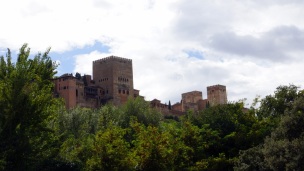 In the evening we booked ourselves for a tapas and Flamenco dance show in town. A bus collected the guests at the campsite and the other hotels in town and then drove through the narrow streets up the mountain to the old gypsy quarters. We were set at tables in a long whitewashed cave. After the tapas the band (a guitarist and 3 other man clapping and squealing) started and 3 ladies entered and one by one gave a tap-dance/flamenco performance. Nice but next time I would like to listen to better singing and possibly understand what was performed. 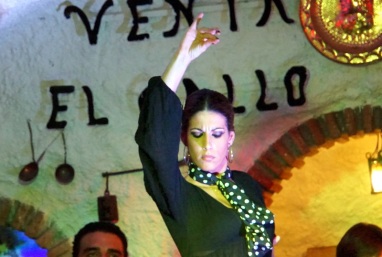 In the morning, after taking 2 buses we got to the entrance gate to Alhambra at 12:00 noon. We were only allowed in to the grounds at 14:00 hrs and the Nasrid Palace (1354). We therefore wandered to park and visited the “Generalife”, which is a pristine garden with terraces, water streams and outhouse buildings. It was the relaxation place of the rulers till in the 18th century. Note that the Muslim emirs rules here up to 1492, some 250 years longer than elsewhere in Spain. These rulers built the Nasrid palace. What is different from the palace we saw in Sevilla is that the floors are still covered with marble. There is ample water flowing through the rooms to fountains to cool the patio’s and rooms off during the summer. The wall and ceiling decoration is more opulent. The 3D constructions of the ceilings look similar to those seen in Samarkand on the silk road. Here they were however only painted, of which not much is left. In Samarkand there were covered in mosaics and gold leaf. Next to the Muslim palace, Carlos V made an ugly square palace in 1527 with a two story round courtyard in the middle. Surprisingly the columns are made of conglomerate and hence does not look very attractive. The first palace on site is the Alcazaba. A plain brickwork stronghold built by the first emir in 1238. Because of Rudy’s painful ankle, we took a taxi back to the camping. 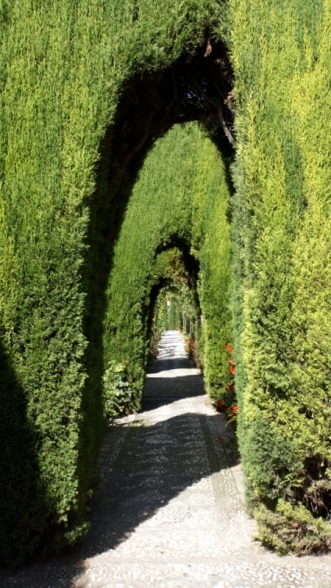 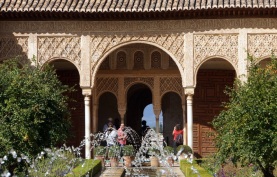 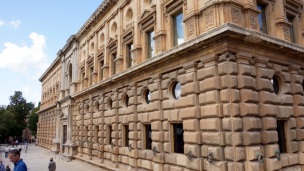 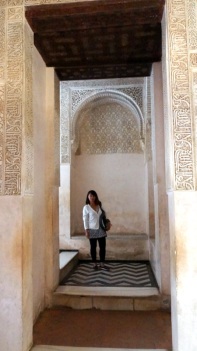 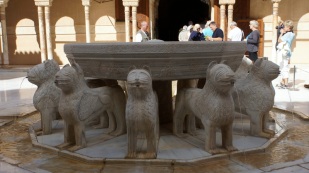 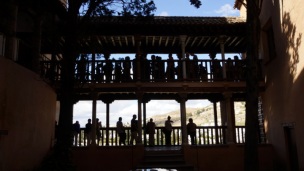 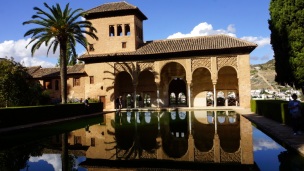 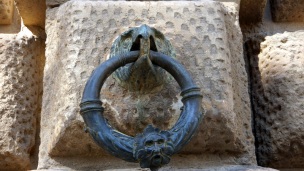 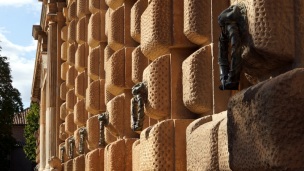 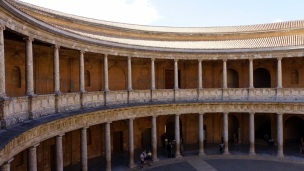 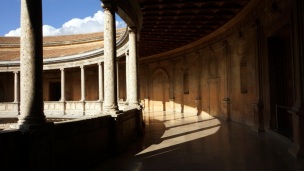 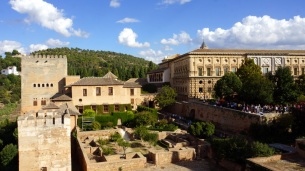 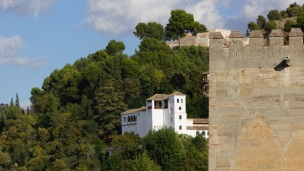 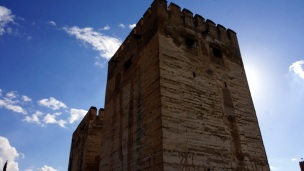 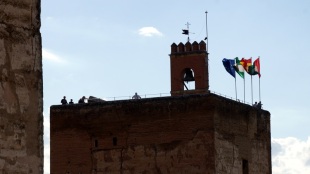 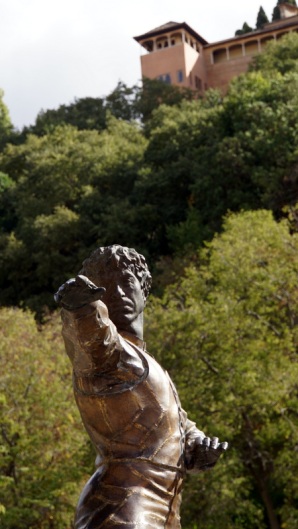 The weather has been kind to us on this trip. We didn’t have that much rain (just twice so far) and the temperature is around 22-26 degree and sunny. We had a colder day up in the El Torcar national park (9 degree and windy).