We left our penthouse and dragged the bags to the nearby bus station. There we heard that the bus for Zarate departs from the other side of town. Exhausted from walking we got into a taxi. The bus terminal was hidden away between the buildings in a large hall. After topping up the local bus card we could pay for the trip. After 2.5 hrs and 90 km we were dropped off at the bus terminal in Zarate. Opposite was a Hotel. What luck.  However it was full. Dragging the bags through the small town from hotel to hotel we found them all full. Apparently this is a holiday retreat for the citizens of Buenos Aires. Finally in one of the hotels we asked to owner to phone around. She could also not find anything but felt sorry for us and arrange a room in her dependence which caters for workers. We were very grateful. In the evening we had a nice stroll to the riverfront. Large seagoing vessels sailed by. Our ship was also in the harbor a bit further up river. In the evening the river front was busy with runners, cyclist and families picnicking. The restaurant was empty. Maybe too expensive or too early. We were hungry and tucked in.

The next day was the big day. Rudy took the cab to the harbor (again arranged by our friendly helper from previous day). After ID and bag check he was allowed through the gate. In the distance next to the RoRo carrier in-between all the other cars he spotted Passepartout!. After some 5 hours of hanging around and only one signature, the camper was driven out of the enclosed area and handed over. Rudy drove back to the hotel and picked up Jamaliah and the luggage. The best camping was some 50 km away in San Antonio de Areco. This was a large campsite annex day recreational area along a small river. There were some tents on one side but no campers on our side. We had it all to ourselves so we camped next to the river underneath some large trees. In the evening and morning you were surrounded by bird sounds. The bags were unpacked and the groceries redistributed. Jamaliah knows how to give everything a place. Hopefully Rudy will learn soon where everything goes. 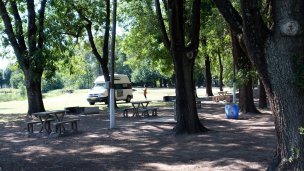 Campsite on the river in San Antonio

Horses drinking from the river

The following day we drove some 500 km in a big circle around Buenos Aires over small but good country roads to the Atlantic coast. We got a real feel for the extent of the pampas. Flat as Holland but much larger. Roads crisscross this part of the land and circles of large trees indicate where there is or was a farm. The land is not only used for cows but also for growing wheat, maize, sunflowers, potatoes and other vegetables we have not recognized yet. 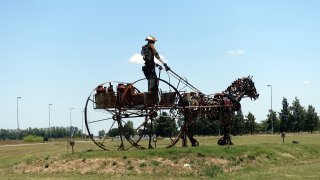 The coastal road was crowded. In fact at each turnoff towards a town on the ocean front there was a large police control post. Why? The coastal towns only had a few surfaced streets. The rest was sand. The streets are all on a rectangular grid making is easy to drive but difficult to know in which road you are on. Several of the iOverlander campsites were full or nonexistent. In the end we found one in Mar del Ayo next to the beach. It was a campsite like we had in the sixties in Holland. Tents, cars and families everywhere. The facilities were also from the same time period but working. The prices at 25 euro per night were modern. We had a quick foot dip into the ocean before settling down for the night. 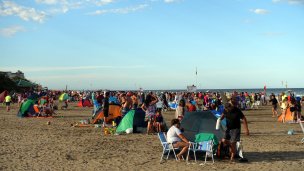 Tough pushing through the sand 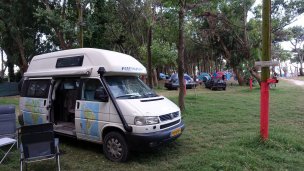 We decided to move away from the coast because most accessible spot would be full of tourist. The drive inland was along mostly straight roads through fields of grass or crops. Also the first herd of cows could be seen. When hitting the main north south road (RN3) we turned south and after some 400 km found a free camp spot next to a petrol station. Noisy but at least a lot cheaper. Paying 25 euro per night for a campsite is not in our budget.