After a while the cultivated land changed into just scrub land. Here and there, there were patches cleared and there was some grass. The roads were straight and long. In the distance in front of you, you saw the usual mirror on the road. Sometimes a car/truck was floating in it. Instead of the road getting less busty it became fuller. Whole Buenos Aires was heading to the beach or returning. We were hoping that we had already left the crowds behind but that was not the case. We turned off the main road South (RN3) towards the coast. We read that there was a large colony of parrots which build their nests into the cliff. We wandered on the beach, avoiding stepping on peoples towels and looked up to the cliffs. Lots of holes but no parrots. We had to wait till sunset. Some 4 hrs away. Light got bad but we managed to get a few pictures. The video Jamaliah shot clearly give a better idea of all the noises those parrots make. 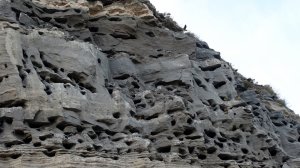 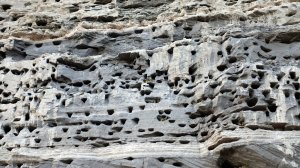 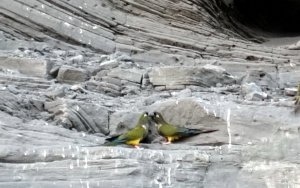 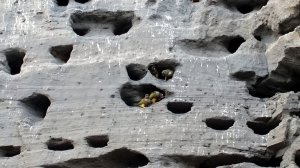 The next day was another 500 km travel day. It started with a long stretch, with great view of the Atlantic ocean, over a washboard road along the coast. Several sections are slowly being reclaimed by the sand dunes, We hit the main RN3 again and drove down to Puerto Madryn. The Peninsula Valdes is the main attraction here. We will save that for the next few days. 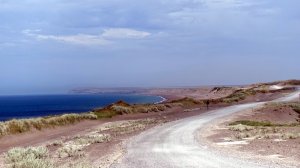 If you look at the map (red dots are camp spots, black line our route) you can see that after some 2000 km we are almost half way down the length of Argentina. Patience is what you need here.