In Ushuaia we walked up the streets towards a hostel where we booked ourselves a room. At least that’s what we thought. By the time the room was released and we paid, it turned out to be a 6 people dorm. No worries after the luxury of the cruise we can handle some downsizing. The day was spent updating the blog and wandering the streets. 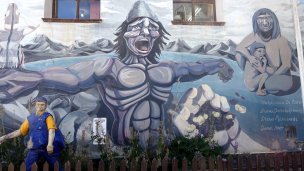 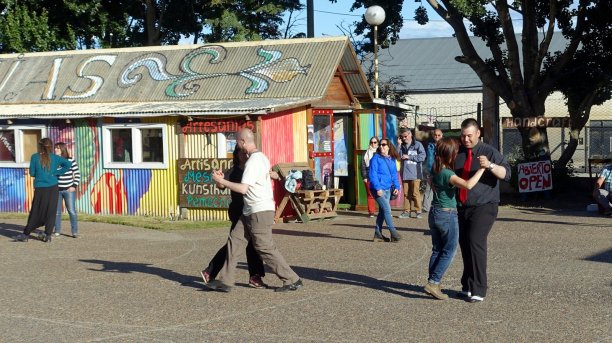 The next morning it was up early to catch the 8 o‘clock bus back to Punta Arenas in Chile. Including border stops, the bus did the trip in 9 ½ hrs. We walked with our luggage to the boat terminal and retrieved the camper without too much hassle. There was however a senior customs officer who had to show his authority and made sure everything was recorded in the logbook. Apparently what we had done was highly irregular because the camper was parked on the duty-free side of the gate. We drove south out of town towards the same camping spot along the river that we used before. This time we went a bit further till the road ends and from there people start hiking towards the south tip of the Americas (32 km). Along the side of the road there was ample camping space under the trees by the sea. 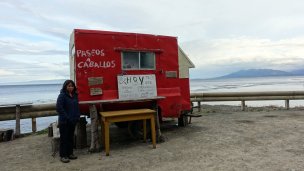 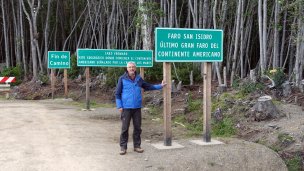 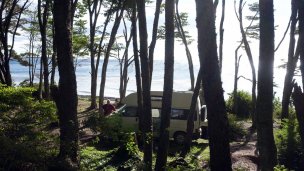 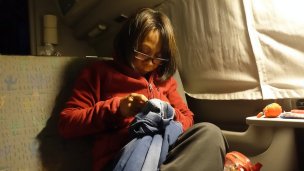 On Friday 9/2, before leaving town, we made a stop at a museum which had exact size replicas of the boat Magellan used to sail around the world (1520) as well as a copy of the Beagle on which Darwin had sailed for 5 years on his fauna discovery trip (1830).  How could crews of up to 40 people live for years on such small ships. 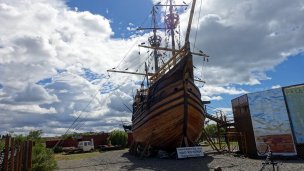 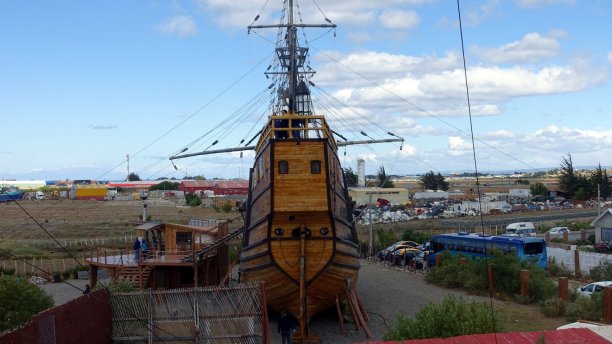 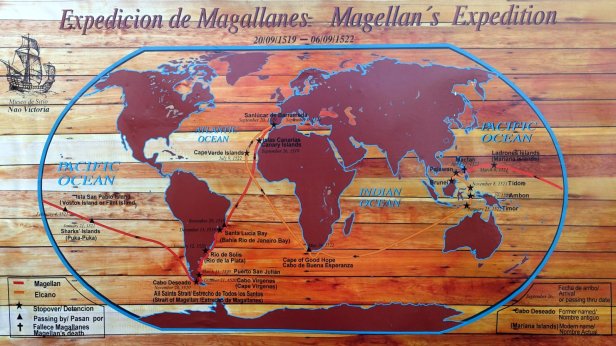 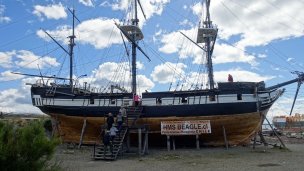 The 240 km drive to Puerto Natales, close to the Parque Torres del Paine, went over a smooth concrete 2 lane road. The landscape started off flat and grassy but slowly became hilly and wooded closer to town. We can see the mountain range and fjords  ahead. Here we are staying in an official campsite in town. There are several Overlander campers here as well as tents from international youths  who will be walking on the famous trails in the National Park.

We stayed 2 nights at this site to catch up with the blog and also do our first washing. It had piled up. Rudy also took out the bike for a spin through town. The streets are in a grid pattern like most towns in these countries. Most streets are one-way. There were many Hostels and shops selling camping equipment. All with a view to ytrekking in the nearbt NP Torres del Paine. 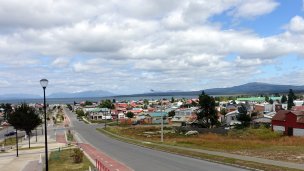 Mountains in the distance

We obtained a new Sim card for Chile. This time 4G. This allowed Rudy in the middle of the night to listen to the radio broadcast of Sven’s 5,000m Winter Olympic race in Korea. He won. Now hoping on Thursday we can follow his achievements on the much more difficult 10,000 m race.