With a group of 7 tourists we walked into the Mountain of Doom. First they dressed us up in an overall and we each got a helmet, headlamp and rugsack. The first stop was at the miners market where we bought a bag of coca leaves and Fanta for the miners. The guide handed them out along the way underground to the miners. He also gave us a demonstration of how to chew the coca leaves and add a bit of catalisator to it (bicarbonate or ash bitten of a bar) to make it work (stimulate). Also we were allowed to handle some dynamite putty which the miners use underground. 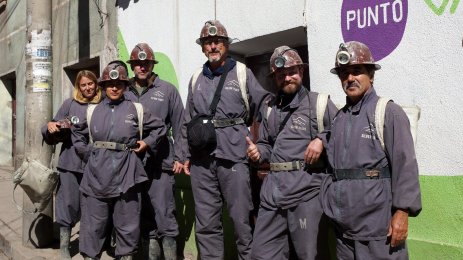 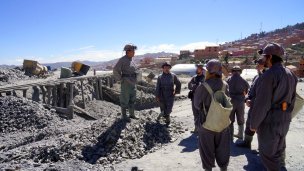 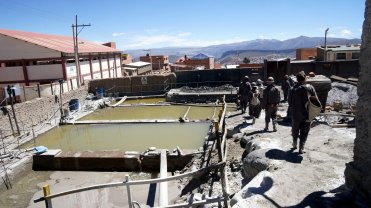 There are some 250 separate mines in the mountain. First they were all government owned but, after the government fired some 3000 miners some years ago (due to silver crisis), they decided to start for themselves. They now have a cooperation of mines. Each mine has several teams of 6 to 12 miners working together. Some teams are lucky and find a rich pocket of minerals while others are not. This is only shared within the team and also in such a way that the finders get the biggest portion. This lucky strike is the reason why so many miners still opt for the cooperation instead of the government mine. The working conditions are bad. You walk into the mine following the tracks of the dump cars. Each time one comes close, you have to find a niche to squeeze yourself in. The 1 ton carts are pushed by 2 members of the team. Some 2 km in we find the work front. There in a side crack they are drilling and blasting away following the ore seam. There are holes going down and up searching and mining the seam. Only at the rock dump shoots is there some support but for the rest the rock is unsupported. Since there are no maps made of the tunnels it can happen that you tunnel/shoot into somebody else’s tunnel/seam. Although they said that hardly happens because they can hear the explosions of the other teams. Beside silicosis (after 20 years) the most common cause of death is coal monoxide. They have no equipment to detect it.  All in all a unique visit. Where else in the world are you allowed underground in a working mine with such unsafe conditions. We also made a visit to one of the 32 extraction plant where the minerals are grinded and separated from the rock using flotation cells. The concentrate is sold over the world to smelters o.a the plant in Budel (NL) where the zinc is recovered.

In the afternoon we visited Museo & Convento de Santa Teresa (Caramelita order). The 6 remaining nuns are now housed somewhere else and the buildings are converted into a museum. Since each rich family sent their second daughter with a large dowry into the convent they were very rich. That richness is now on display in the various rooms. By rule, the convent could only consist of 21 nuns. They entered at 15 years old for life and never saw their family again. They could be visited once a month but only communicate via a closed curtain. The foto gallery gives an impression of the unused wealth of the convent. 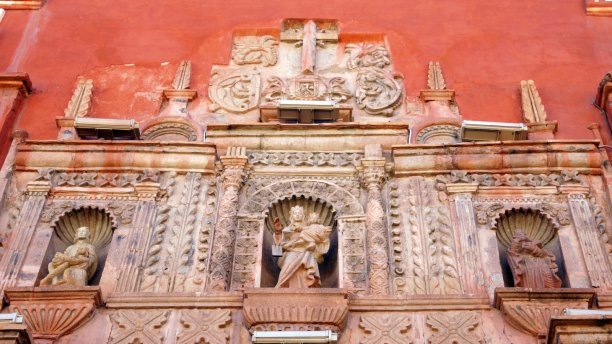 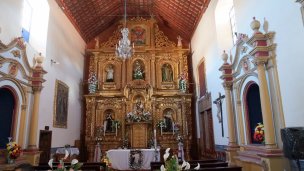 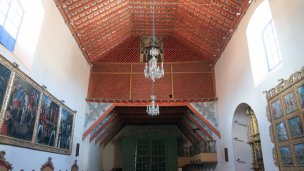 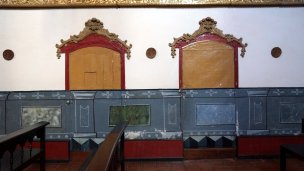 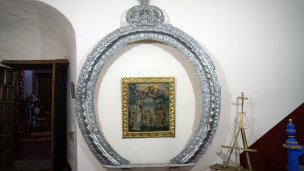 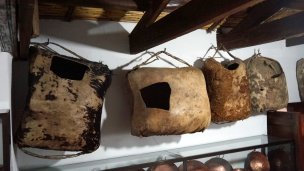 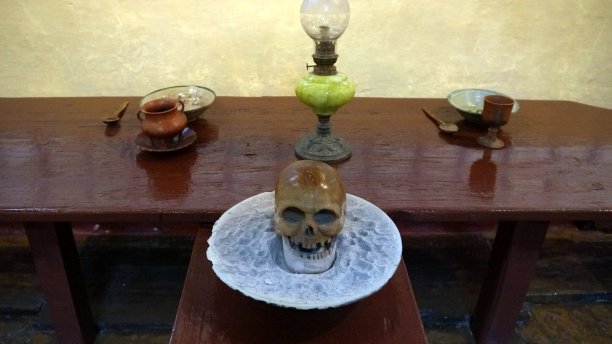 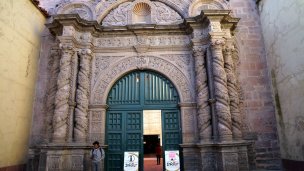 On Tuesday 10/4 we were in time for the first tour of Casa Nacional de la Moneda. In 1572 the Spanish started to mint silver coins here and ship them then to Europe to pay for the wars to defend the empire. Over the years the minting was more and more automated. All machines used were still present in the building. From the single coin press, the wooden mule driven rollers to flatten the silver to coin thickness to the steam driven rollers and punchers and finally the electrical system. The last coins were minted in 1953. 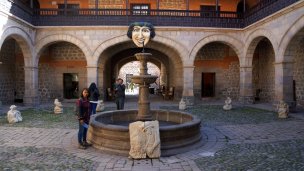 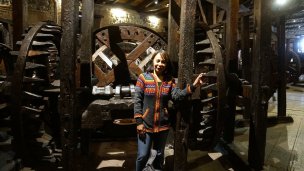 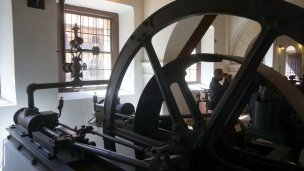 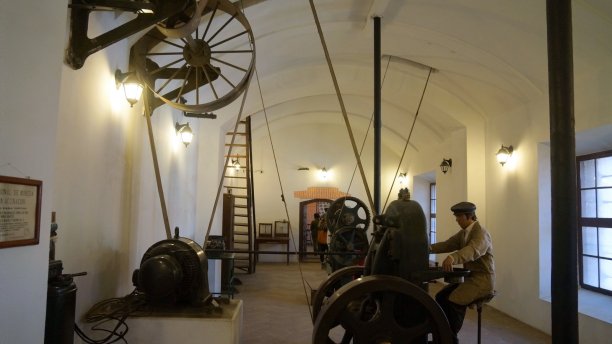 In the afternoon we drove to Uyuni, some 210 km over a very good tarmac road. Getting out of town was difficult because along the road out there are several ore mills and the trucks bringing the ore are parked behind each other closing off one of the 2 lanes. It is free for all so we had to wait some 30 min before our lane finally could start moving around the several 100 m long row of trucks. A traffic light or a policeman could have divided the remaining space a bit fairer. 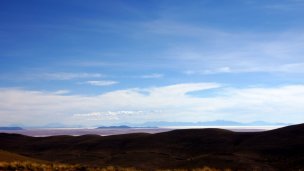 In Uyuni, we visited the steam train graveyard in the open desert outside town. 2 rows of 10+ steam trains are parked there one after the other. They have been stripped of all valuables (everything non iron) and left to rust away. A beautiful sight to wander around. 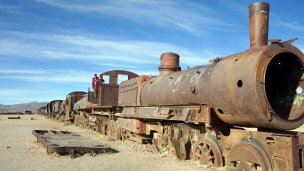 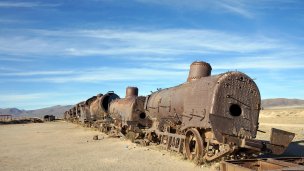 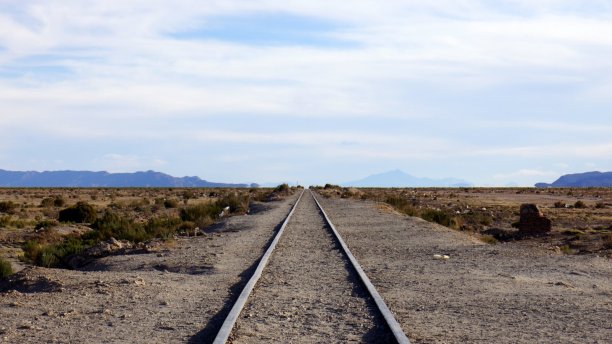 We needed internet to send out the last post so we dropped into an Italian restaurant (free wifi) for a dinner of soup and a lama steak with fries, rice and salad. As it was already dark, we decided to park our camper at dead-end street opposite a hotel, instead of at the train graveyard. Unfortunately this street lead to the army barracks. In the middle of the night they had shooting practice and at 4:30am they started to practice their marching band skills till daylight and beyond.

After the noisy and sleepless night, we drove some 20 km further along the salt flat till where you could enter.  Unfortunately the entrance to the salt flat is flooded. As usual, we waited till a tour group using Land Cruisers showed how we should cross the 10 to 40 cm deep, 150 m wide water layer along the rim of the salt lake. With diff-lock on we slowly drove through in first gear. We made it. The salt flat is flat but not smooth. The water had just evaporated so there were soft patches as well as patches of hard irregular crust. There are no roads just many tracks made by the tour groups. We typed in the coordinates of the Dakar monument next to the disused salt hotel. That was only a drive of 9 km. There we heard that the beautiful island (isla incahuasi) in the middle of the lake is only a 20 min drive. I convinced Jamaliah that we should do it. Because of flooding, this island is just open to visitors 4 weeks ago. While on the way we typed in the coordinates and it is actually 61 km in a straight line. The track is clear but not smooth and occasionally washboard. Fortunately not so bumpy as the washboard roads over sand. Still it took some 1½ hr to reach the island. It was well worth the effort and the internal car tension. The little peak sticking out of the salt lake was covered in enormous cactuses. Around the island the various tour groups set up camp for lunch. So we followed their example. 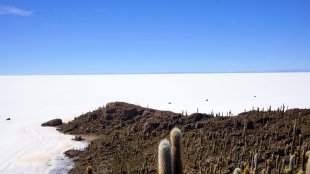 On the drive back Jamaliah suggested, to my surprise, that she would like to spend the night on the salt lake. It would be a lot less noisy and we would have a good view of the stars No light pollution. We drove back towards the Dakar monument and camped just 2km away from it and then waited for the sun to set. One by one the tour groups passed us by and in the end we had the lake to ourselves. The temperature is dropping outside so we keep all the windows closed and will sleep in our warm sleeping bags. We are still at 3600m high. At 21:00 hrs we checked the sky and saw the milky way and many of the zodiac signs. This time Jupiter was clearly visible 30 deg above the horizon. In Chili at the observatory he was still not up at 22:00 hrs when we were there. Outside it is 7 deg C so we are now warming up on some hot chocolate.