We had a good sleep last night even though there is no aircon or fan. The cave room we are in is quite cool (constant temperature) even if the outside temperature changes. In our travel, this is the first hotel we had that had a Jacuzzi and a shower box in the bathroom. Therefore the bathroom is quite big and spacious. The room itself has a double bed (a half wall separate it from the sitting area) and three sitting cum sleeping couches which is the size of a single bed each. The boys have no problem sleeping in these.

This morning, after a very plentiful breakfast of cereals, fruits (grapes, banana, cherries, apricots), bread, jam and fruit juices, Rudy and Jamaliah took off, first, to visit the Kaymakli underground city. (The boys stayed back at the hotel. Bernard got his first bad case of diarrhea and Jamaliah preferred him to stay close to the toilet if possible. Anton was more than willing to keep him company. The hotel receptionist promised to keep an eye on him as well.)

We took a guide with us for this excursion into the city. As Jamaliah is quite claustrophobic, Rudy thought that with a guide, she will feel a little bit less so. It was quite okay to start with. We went into the cave through a narrow entrance, going down several floors underground. This particular city had more than 10 floors below ground. On several occasions, you almost have to squeeze yourself through the tunnel or if not actually crawling but really bent over to enter the rooms. The guide showed us the kitchens, bedrooms, stables, graves etc , including the main airshaft. The city was built on a gradual downward spiral, thus you don’t realize that you are going further underground. Jamaliah started getting anxious when we encountered a large group of people blocking the very narrow tunnel in front of us. As the tunnel is very narrow, there is only one way in and one way out. Going out the same way you come in is not an option as there are people coming in and blocking the access. So you are stuck in between. Normally this is not a problem for most people. For Jamaliah it is. The guide kindly took her to a much larger room and keep up with his explanation to distract her while we waited for the group to move further ahead. Even though we could go further in the tunnel, we had seen enough and decided to move on to the next excursion. Our next stop was at Ihlara. 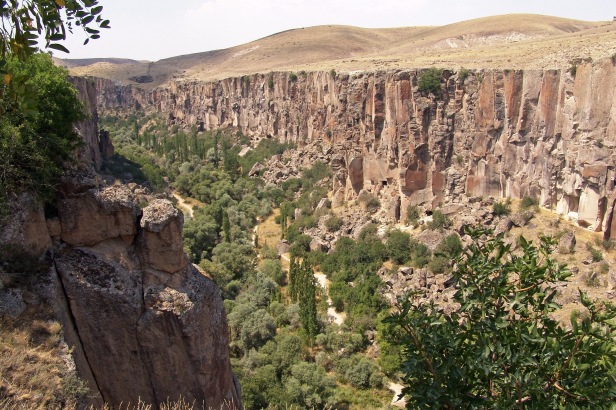 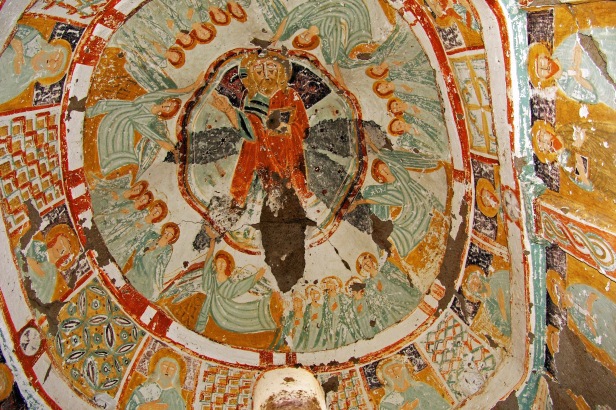 To get down to Ihlara gorge (a beautiful canyon with several rock-cut churches); we walked down +400 steps (Rudy counted this on the way up). Then we walked some kilometers along the gorge beside a stream, to a couple of churches there. There is actually a footpath you could follow in the gorge that led you to Guzelyurt (another rock-cut city, 16 km away). We instead, decided to do this, by car. After visiting 2 more churches at Guzelyurt, we drove back to Uchisar via the mountain highway. A beautiful drive along the high plateau, again full of wheat fields. 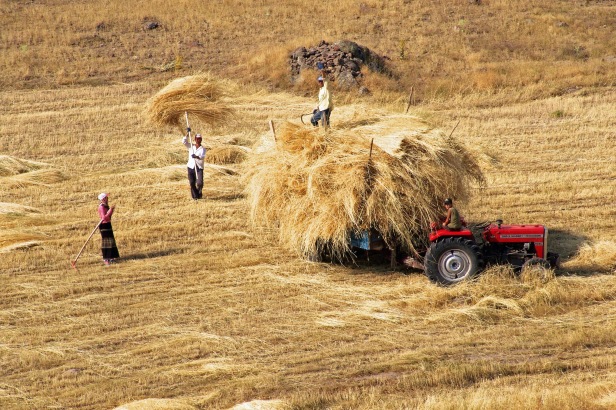 After picking up the boys from the hotel, we first went walking up the hill to a viewpoint on top of the town highest peak. Although the temperature showed 33 degree but it was actually quite pleasant. Sunny but with a nice cool breeze. For dinner, we took the car and drove to Goreme. We did a quick sightseeing tour by car around the town. Very impressive indeed. Beautiful rock formations to be seen.

Rudy and Jamaliah would have loved to stay here for a couple more days and probably do some walks into the canyons. But unfortunately we have to move on. We still have quite a lot to see around Turkey before ending in Istanbul and moving on to Bulgaria.

Hope to leave the hotel around 0900 tomorrow morning as we have another long drive. This time driving West to Antalya (coastal city on the Mediterranean sea).