Yesterday evening in the hotel lobby we could work out all our e-mail and finally update the web log. It took longer than I expected. Even before I was done the first messages were coming through of friends who read the blog. Thanks for that. Also confirmation that our “Find Friends” app had found us because the phone also had an internet connection. No hiding from you lot! We also received news that our trip to Baikanour (the Russian space centre in Kazakhstan) was cancelled because we would only be allowed to have limited excess which would not make it very interesting. The other members of the party are taking this opportunity to stay longer in Volgograd and see the Liberation Parades on 9 May. We will join them for that. We now have some 3 days extra on our hand and Jamaliah suggested to visit St. Petersburg. After some calculations it looked like this is possible and so we set off in that direction.

In Minsk the roads were very quiet. Near the outskirts and especially close to grave yards there were traffic jams. This must have been some sort of remembrance day for orthodox christian (who can confirm this?). The 500+ km was smooth driving. You noticed that there were more trucks on the road (trade with Russia must be more than the trade with Poland/Europe). The country side was more varied with forests and grain fields. The border crossing into Russia was a non event. There was a sort of a border post with some hitchhikers. We stopped but were waived on. I am still wondering if this was a smart move. Now we have no stamp showing when we entered Russia. On the other hand we did enter Belarus and at that border point the car was imported into the complete Russian federation for 3 months. So maybe we are also OK….?

After driving though some more logging forests and finding a cash point machine in one of the small towns we drove off the road on a logging track and found our second bush camp of this trip. You will have to do it with a picture of the camp site. I should have taken some shots of the wooden painted houses in the small villages we drove through. Tomorrow! 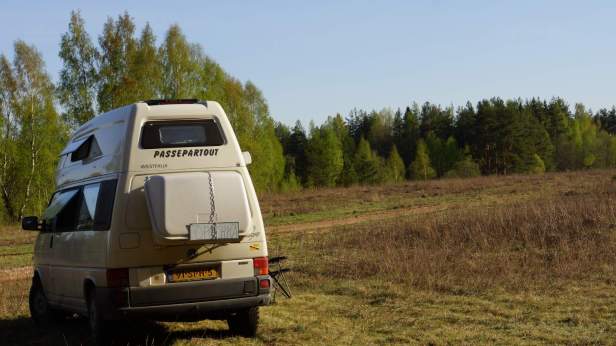