We had some catching up to do. The others were 4 hrs drive ahead of us. No worries. Passepartout (our camper) is a fast and reliable car. We drove out of Osh at 8:10am, topped up the car, and on the way. It felt like a highway. Smooth all the way to Jalal-Abad with a touristic stopover in Ozgon to see a 12th century mausoleum.

There we turned off the main road to slowly drive up the valleys and climb to the 3062m high Kaldama pass in the Fergana Range. The road started through woodlands (Walnut etc) and then tinning out to grasslands. Along the way there were several summer family settlements. Some of them lived in the traditional Yurt’s. Mostly they were looking after large groups of horses. Some small boys even took part in herding the horses by riding around and pushing the animals away from the car. The final climb up to the pass had just been cleared of snow and rock fall. The pass had only been open for 2 days. Some stretches were still though walls of snow. 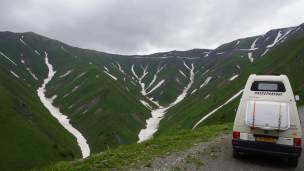 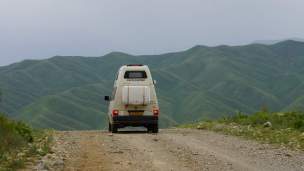 Over the top on the way down we caught up with the ladies and soon after met up with Jeroen on a beautiful camp spot overlooking the Naryn river valley. 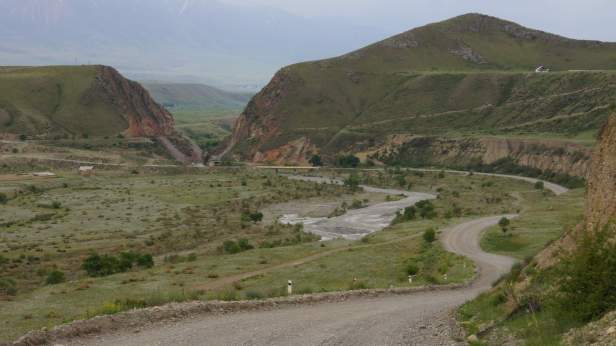