Fortunately there was only some 20 km of rough road left till the tarmac started again. Then it was a smooth drive to Bulgan. We went out of the Selenge river valley and over the mountains (1500 m) to the Orhon river valley. In Bulgan we missed the turnoff so decided to find a bank in this town. Since it was Monday it took a long time to change the $ but after an hour we were on the way again. Some 60 km later came the mining town (copper) Erdenet where Jamaliah visited 3 shops to stock up and we were off again to the Amarbayasgalant monastery. The last 36 km of the road was up and down a sandy/ridged track through the hills and grass fields. Being an important monastery for the locals it is surprising that the road has not been upgraded. At the end of the high valley (1026 m) stands the Chinese style (=forbidden city) monastery. Almost all temples are open and we took our time to wander through them. There were other local tourist but very few monks. Up the hill behind the monastery there is a large Buddha statue and on the other side a stupa. Both are new. Constructed from marble and fitted with beautiful lighting. Several of them are already broken. There were not switched on at night. From the top of the stupa we spotted a tree line in the valley indicating a water stream. We drove there and camped for the night. Several local campers were also spread out under the trees. There was a heavy thunder and lightning storm during the night, which caused some campers to flee to the nearby Ger camp. 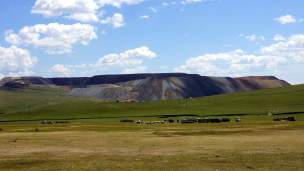 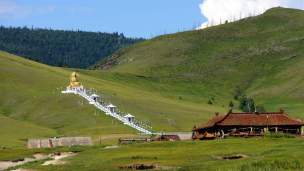 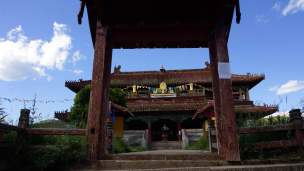 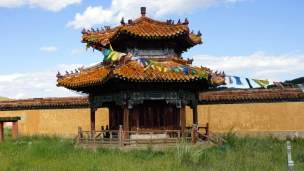 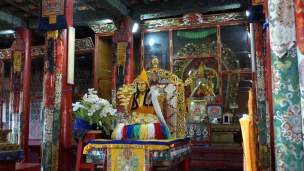 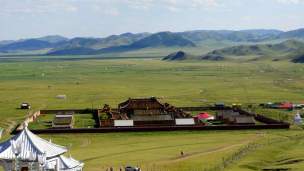 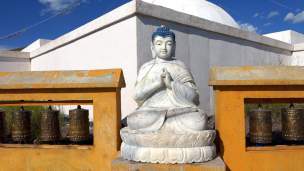 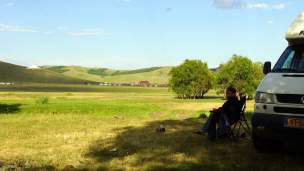