We continued the road to Yekaterinburg and parked in the town centre in front of the beautiful 1947 City hall. Once Boris Yeltsin was major here. We managed to find his statue covered under plastic because it was on a building site. In fact the whole centre of town is getting an upgrade. We visited the site where the last Romanov tsar and his family were executed. There is now a church. The crypt was open and showed family photographs. The main church was being restored. 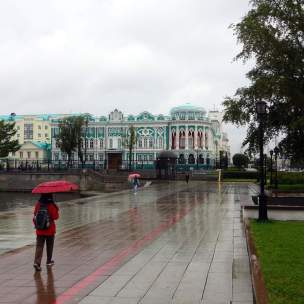 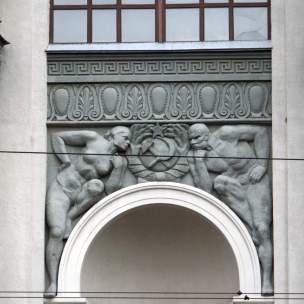 Church upon the blood (of the Romanov family)

On the way out of town we hoped to find the place in the forest where the tsar’s family bodies were dumped (now a monastery) but the turnoff on the highway was blocked off and we could not find another way to it. Also later we hoped to see a border marking between Europe and Asia. It was not our lucky day. Also that we did not find. We drove on in the direction of Perm and drove off the road on a muddy track full of deep holes and water puddles towards a small lake. We did not want to go too far and set up camp on the side of the track. Even there some cars came bouncing by looking surprised at us and wondering what we were doing there.