A bit further down the road along the Buller river was New Zealand’s longest suspension bridge. A left over (albeit restored in 2011) from the gold mining period. Tourist now cross it to the other side to board the jet boat (Rudy) or wander around the forest (Jamaliah). With a jet boat you can go at 80+ km/hr up the river and race over small rapids. The driver brings extra excitement by every now and then make 360 deg spins whereby you have to hold on tight so to not propel out of the boat. Meanwhile Jamaliah was having fun going back and forth on the bridge. 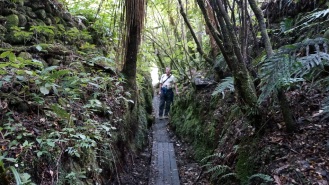 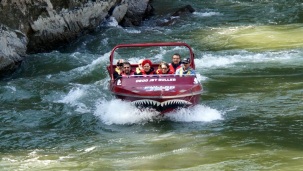 In Westport we were just in time to visit the new coal museum. From 1880 to 1967 coal was mined here in small underground mines in the mountains along the coast. It was transported down the mountains in wagons running on tracks with a 45 deg incline. Since the seams were so irregular most mining was done by hand. These seams made Westport famous (in New Zealand).

Further down the coast at “Cape Foulwind” is a colony of seals. The mothers were lazing in the sun while the young (red and blue tagged) were crawling all over the place. In the evening we camped at Charleston after a nice and warming sunset drive through the field between the sea and the mountains. In the night the sky was clear and we had a spectacular view of the stars on the southern hemisphere. Totally different then we are used to (if you ever get to see them in Holland). The milky way was clear band of eliminated dust with bright spots dotted throughout. 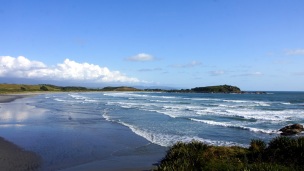 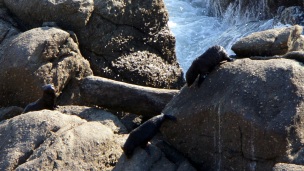 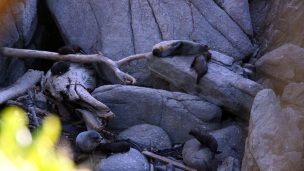 At 11:00 am we had booked a cave tubing trip for Rudy. Jamaliah only came along on the train drive through the rain forest to the swing bridge across the Nile river. There were 8 of us (a full group). Each got a tube which we carried over the bridge through the forest and some 132 steps to the cave entrance. From there it was 2 hours wandering through the limestone cave ducking for the encroaching sealing and rolling the tube in front of you when the passage was narrow. There were long uneven walks over the cave floor with some beautiful cauliflower covered rock as well as the usual rows of stalactites and stalagmites. The many sheets of calcite rock folding down from the cracks in the roof were the most impressive. There was no artificial lights so we felt we were on our own in this big long (2 km) cave. Slowly we worked our way down to the level of the river and put our inner tubes into the water to float out. Above us on the ceiling, while we floated, were endless small light points like stars at night, except these were glow worms trying to catch any insect wandering into the cave. They have long silk lines fishing down to catch them. After some 20 min we floated out of the cave back into the river and then downstream to the swing bridge and the waiting train. In the evening we camped some 31 km further south near the pancake rock blow holes (although we had to drive 3x that distance to pick up the left behind towel and swimming trunks). The road hugs the limestone cliffs with some spectacular views of the Tasman sea trying to erode away the coast line. 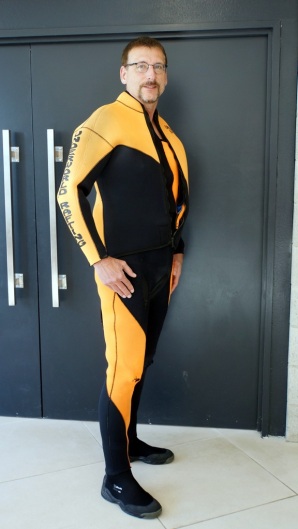 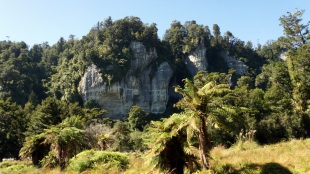 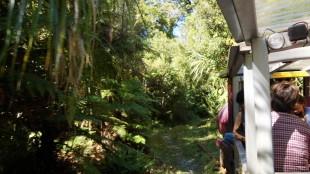 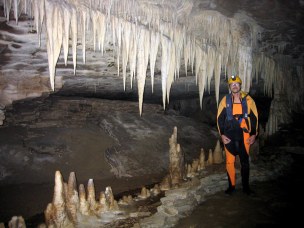 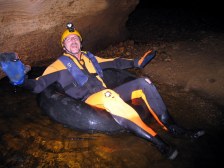 In the morning we visited the Punakaike pancake rocks. A well maintained walkway over the cliffs brings you right above these limestone layer cakes in the sea. It was just after high tide so the sea was roaring in and the few blow holes were spouting steam. 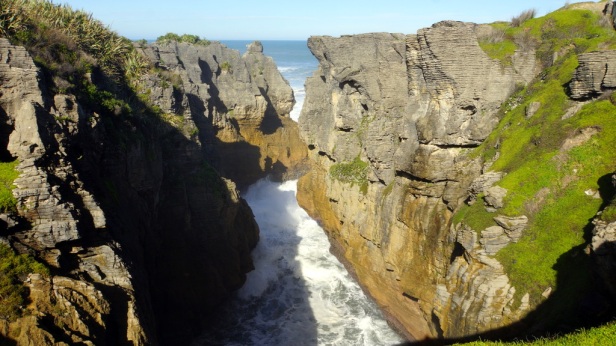 After grocery shopping in Greymouth we drove further south and took a detour towards the mountains in Hokitika. There was a gorge there with again a newly made walk path, viewing platforms and swing bridge. The water comes straight from one of the glaciers higher up in the mountains and had an ice blue colour. 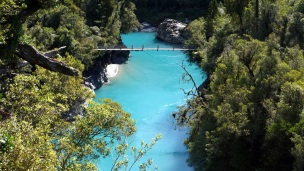 When we reached the old gold mining town of Ross the museum was already closed. We could still see some of the outdoor exhibition and the deep lake which was left over from the open pit mine which operated from 1970 to 1990 to rework the old tailings from back in the 19th century. Outside town we did spot a still operating gold mine. The night was spent at an uninteresting roadside camping in HariHari (224 km). 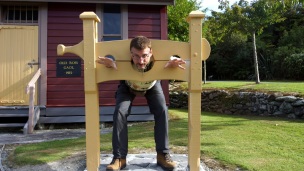 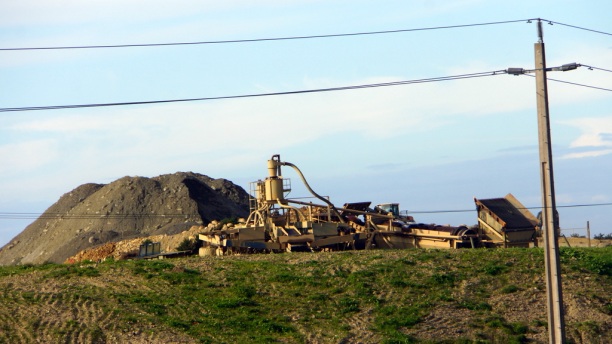 Some 100 km further down the road are the main attractions of the West Coast. The Franz Josef and Fox Glaciers. We were glad it was not peak season for it was already pretty busy. The towns are build for the tourists and it shows. We first made a stop at the Kiwi breading centre and saw (in the dark) a few kiwi’s. Jamaliah was not keen on a helicopter flight up the glacier and Rudy had done it some 25 years ago se we decide to walk up to the glacier. First up to Franz Josef and later up again to Fox. As icing on the cake we went to Matheson lake for another walk to see the mountains reflected in the lake. No luck (too cloudy) so we bought the postcard. In the evening we took the opportunity to have our first dinner out since we started the trip. After dinner we took a stroll along the street of Fox Glacier. There was a nice cosy atmosphere in Fox village with people enjoying their holiday, like we are. 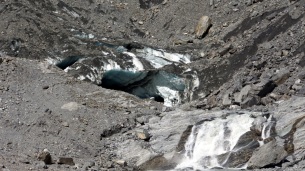 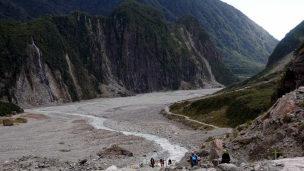 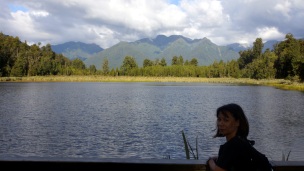 The remaining 120 km along the west coast was a pleasant drive. We first revisited lake Matheson (again, but this time did a complete loop around the lake, a walk of just under 2 hours) and had a bit more luck with the mountain view but still not the postcard shot. 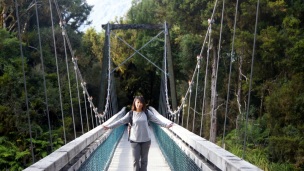 The next stops were at Knights Point where we could see seals (with the binoculars) bathing in the sunshine and at Ship creek for a beach walk as well as a walk through the swamp forest of large Kahikatea tree’s (White pine according to Cook). 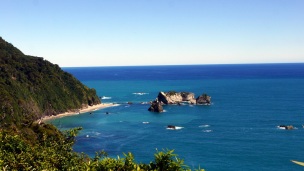 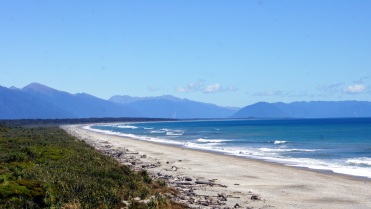 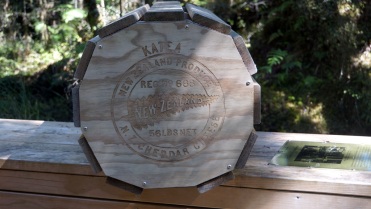 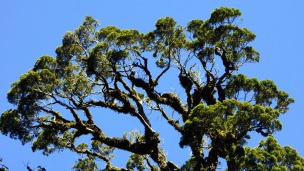 In Haast we turned up the wide river valley to cross over the mountain range. All the way down the west coast we had the most gorgeous weather. Only a few drops of rain in Franz Josef. How lucky can you get in the wettest region of New Zealand. 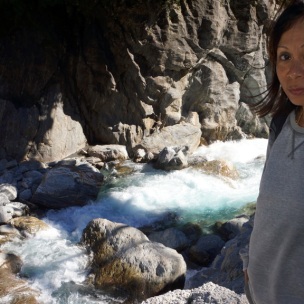